By 7.30am, I was already at a kopitiam, BB 289 Food House, having a glass of iced coffee while Benny was frantically trying to reach Washiyama. 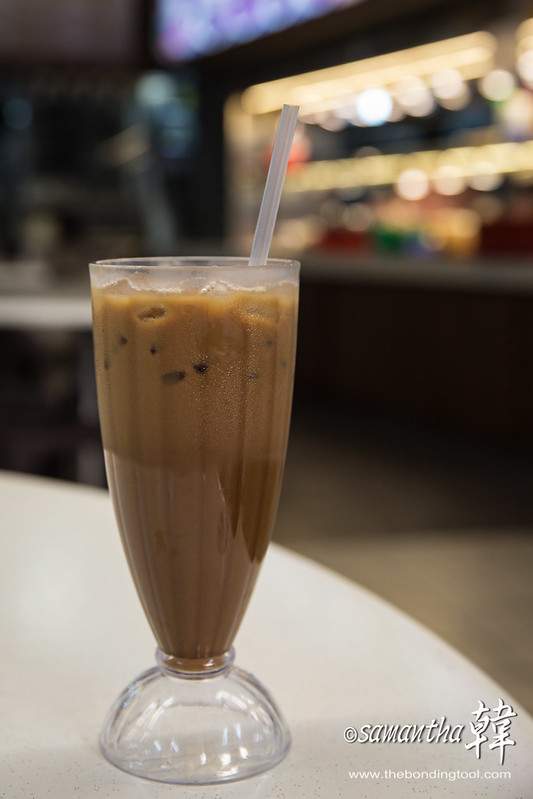 Iced Coffee – A great perk-me-up in the early morn.

“He must have played Dota and overslept!” 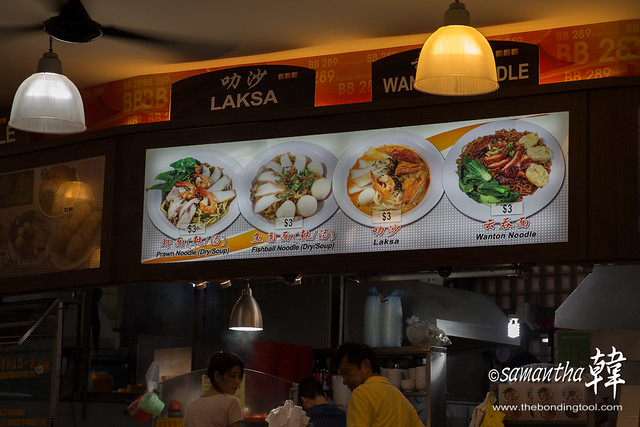 Should I have Prawn Noodles or Laksa?

I asked Benny what’s nice to eat. I couldn’t decide if I should have laksa in the morning – remember I talked about my occasional intolerance to very spicy food with coconut milk? Well, laksa is one of those dishes

“The roast meat stall is very good but we shall have that for lunch after our excursion. Try the prawn mee, which is nice also.” 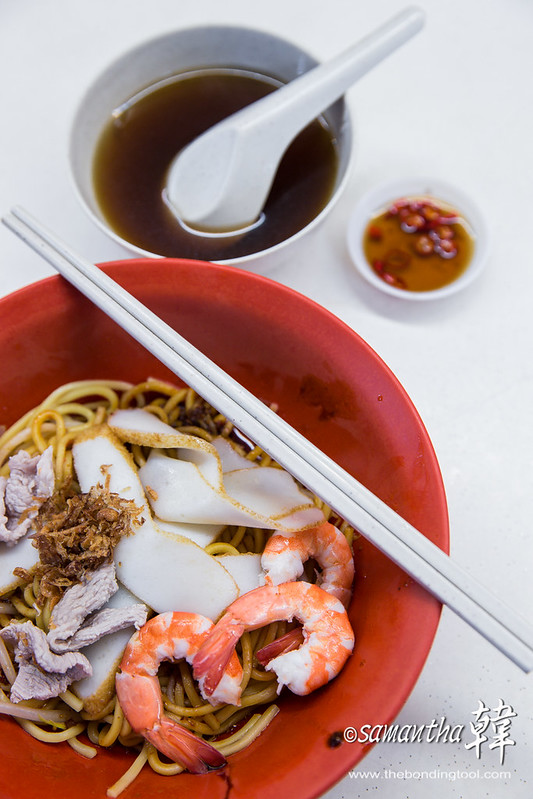 I was halfway through with the delicious noodles when Seow arrived. He would be joining us in the Sungei Buloh Birding trip this morning. It was now my turn to recommend him to have prawn mee dry for breakfast.

Benny got up abruptly and mumbled as he left the table, “He’s awake and will meet us at the Wetland Reserve, instead.”

I must have missed the tele-converstaion whilst speaking with Seow.

When Benny returned he had a bowl of dry Mee Tai Bak. 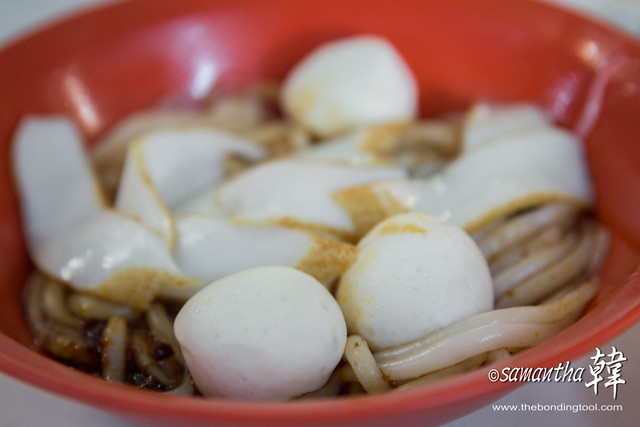 Fishball Noodle S$3.
Mee Tai Bak in Hokkien or Silver Pins as I called them and yet Malaysians nicknamed this noodles as Mouse Tails because of the semblance.

I did not get to taste the silver pins but if Benny ordered them, they should be nice. As for the prawn noodles, Seow and I both agreed that it was a satisfying meal.

We bought the coffee and left for the Wetland located in Sungei Buloh.

The Sungei Buloh Wetland Reserve (Chinese: 双溪布洛湿地保护区) is a nature reserve in the northwest area of Singapore. It is the first wetlands reserve to be gazetted in Singapore (2002), and its global importance as a stop-over point for migratory birds was recognised by the Wetlands International’s inclusion of the reserve into the East Asian Australasian Shorebird Site Network. The reserve, with an area of 130 hectares, was listed as an ASEAN Heritage Park in 2003. – Wikipedia 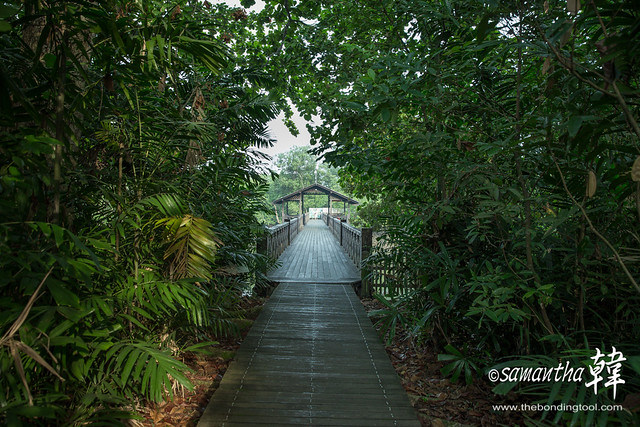 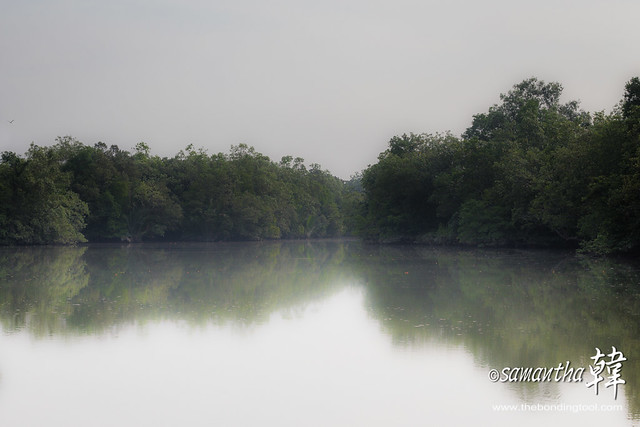 The Reserve was quiet but you can still hear the squawking of some birds.
Most of the migratory birds will not return until later this year.

Yama arrived and we were about to explore the Wetland ahead when a kind hearted birder came to inform us that hornbills had been spotted round the corner. Yama dashed off excitedly and we followed suit! 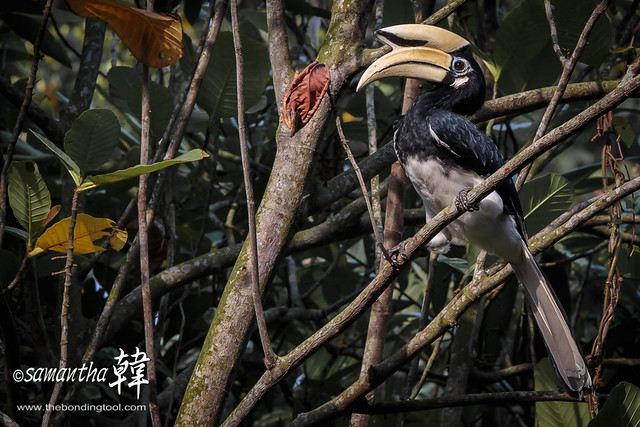 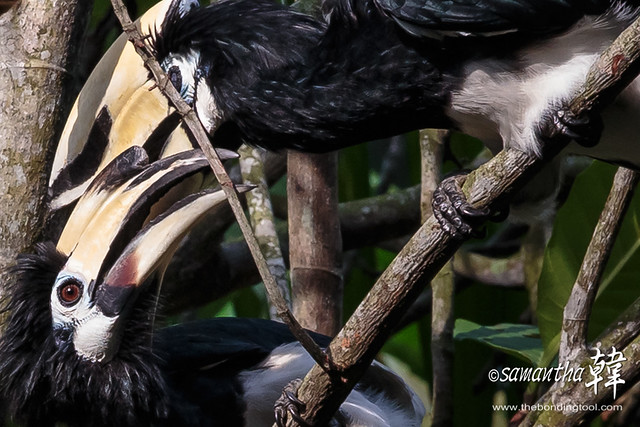 Although the Oriental pied-hornbills are commonly seen on Pulau Ubin and sometimes also at Changi, Yama had not seen them during his past few visits here.

Status and threats: The Oriental pied-hornbill is listed as ‘Critically Endangered’ in the Red List of threatened animals of Singapore. The Oriental pied-hornbills on Pulau Ubin are considered visitors from Malaysia which later started breeding on the island. Two other hornbills were once recorded in Singapore but are now no longer found – The Rhinoceros hornbill (Buceros rhinoceros) and the Helmeted hornbill (Buceros vigil). – information credit: wildsingapore.com 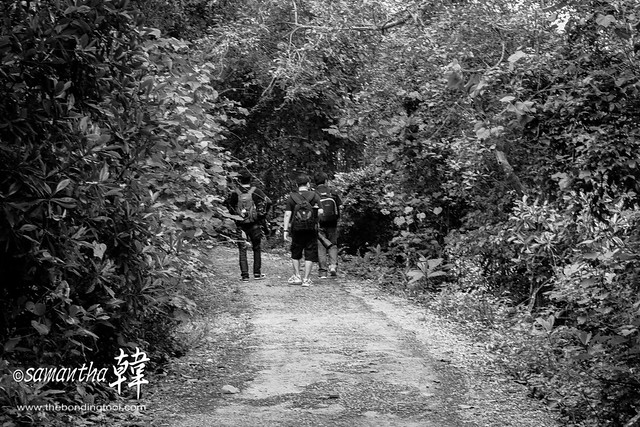 We were all very happy and felt honoured to have witnessed not one but two hornbills, which, incidentally, was in need of some private moments.
The pair flew off and we went in search of other birds. 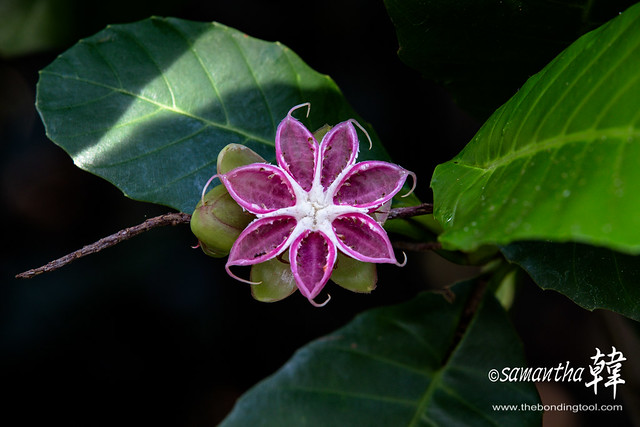 Tranquility ruled the day but our minds were stimulated by our earlier sighting. 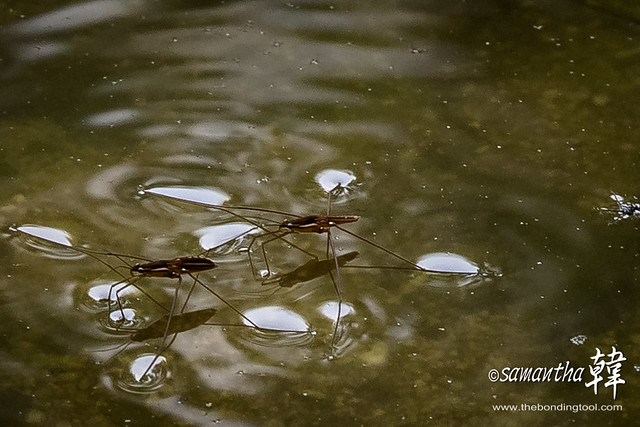 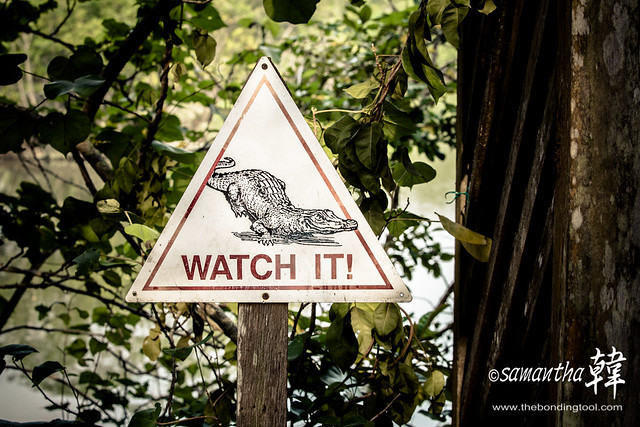 Never smile at a crocodile! 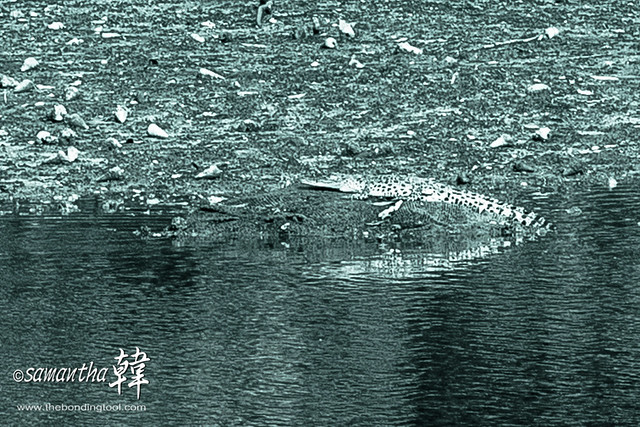 Crocodiles are rarely sighted but that has changed recently as one particular crocodile opted to be in the limelight.
It is often spotted with its eyes just peering above the water surface.
This reptile has established its territory along Sungei Buloh Besar, which is the main river of the Wetland Reserve, and is often seen swimming under the Main Bridge.
On occasions, it crosses overland to the brackish water ponds to thermo-regulate – cooling down or warming up.
Can you see it?
I wonder if this is the one that Assistant Conservation Officer Mr. R. Kolandavelu talked about in his publication. 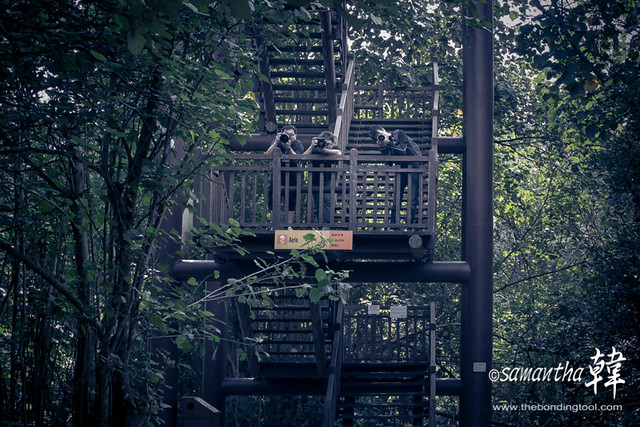 I had 3 lenses with me and was feeling the weight.
The three caballeros were already halfway up the viewing tower. 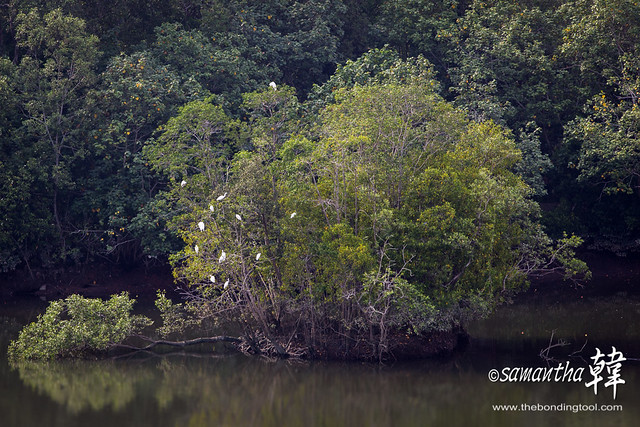 We saw some Herons but that was it.
We left the tower and hopefully we’ll be able to spot some eagles. 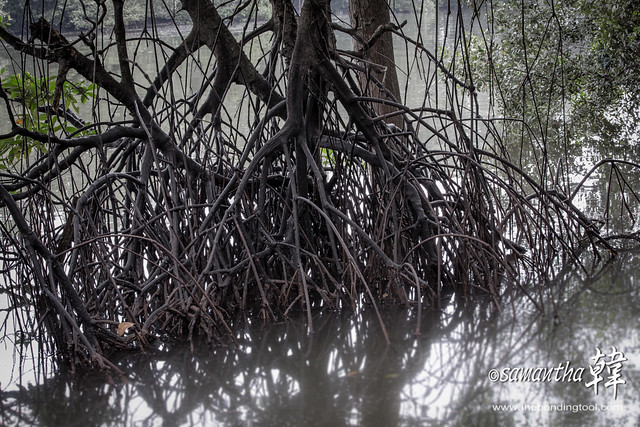 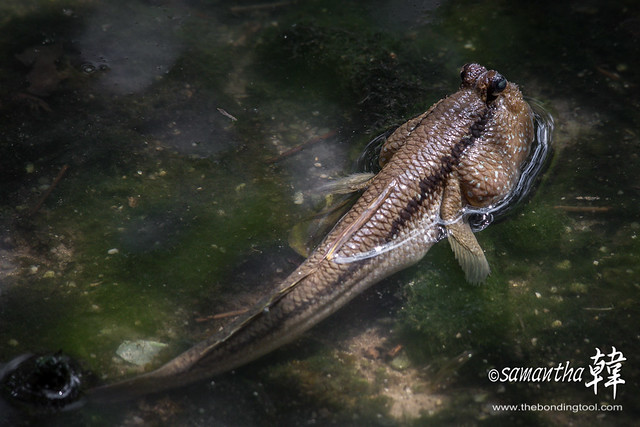 Mud Skipper.
This was huge and far away but I was able to capture this with Yama’s 500mm. 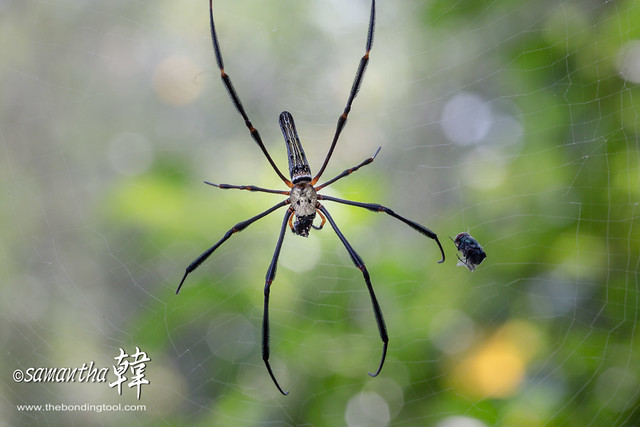 As we walked back, Yama spotted this spider.
I took out my macro lens and went onto the slope trying to get good light for the shot. 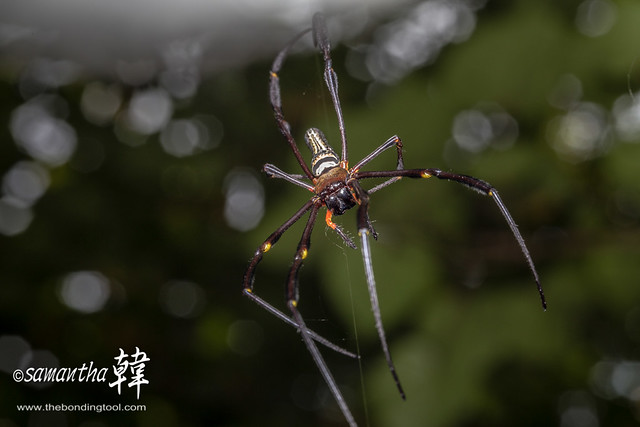 The web was huge and it was difficult to get nearer (the range I wanted) without threatening to break it so I let it go at that. 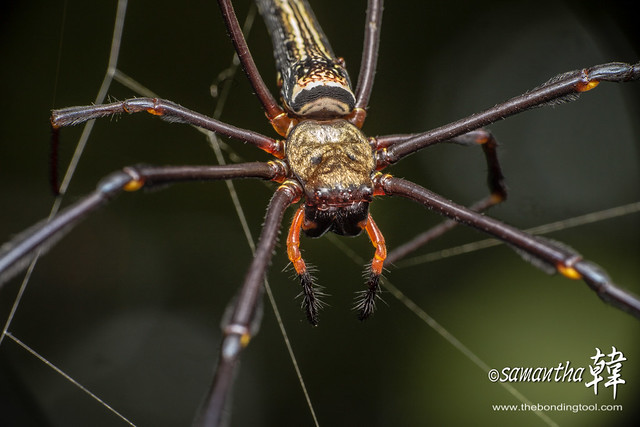 This is not a good macro but it was the closest I can safely capture the arachnid without harming it’s proteinaceous spider silk. 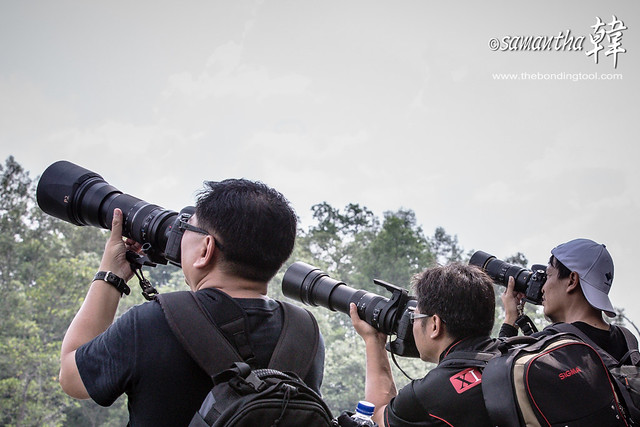 The boys had their long lenses and were taking shots of a pair of playful eagles in the distance.
My 70-200mm could not make it so I took a break from the heat under the shade. 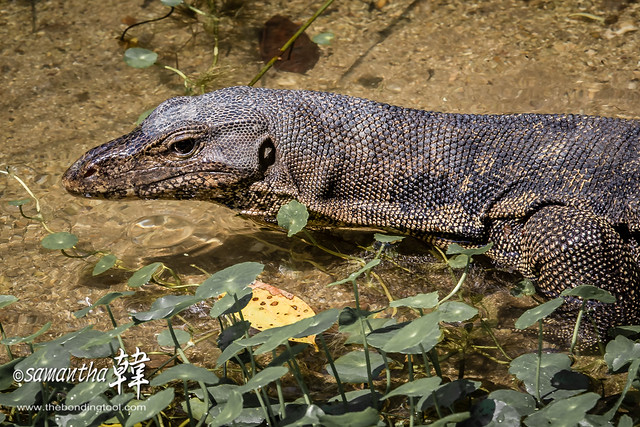 The boys had their eagle shots and I persuaded them it was time to leave.
I had remembered Yama saying that he saw some monitor lizards at the entrance and that sweetie pie was going to be my next and last model 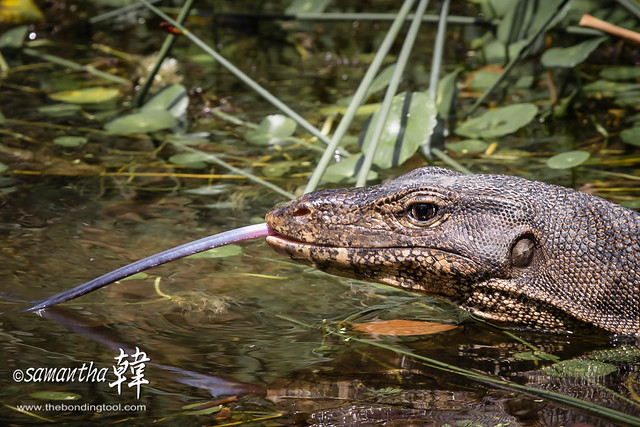 We quickly found one that was about to take a swim.
I managed to get some shots, even had one with its forked tongue sticking out but it was out of focus 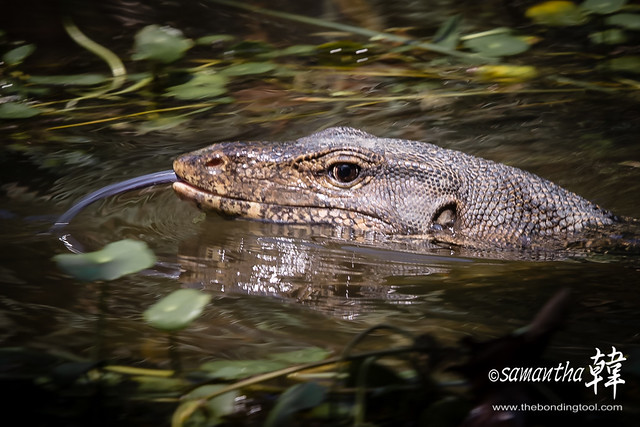 Creating ripples wherever he goes, the Malayan Water Monitor Lizard (Varanus salvator) is one of the most commonly seen reptiles in the Sungei Buloh Wetland Reserve and it was swimming away from my focal length.
Goodbye Mr. Salvator! 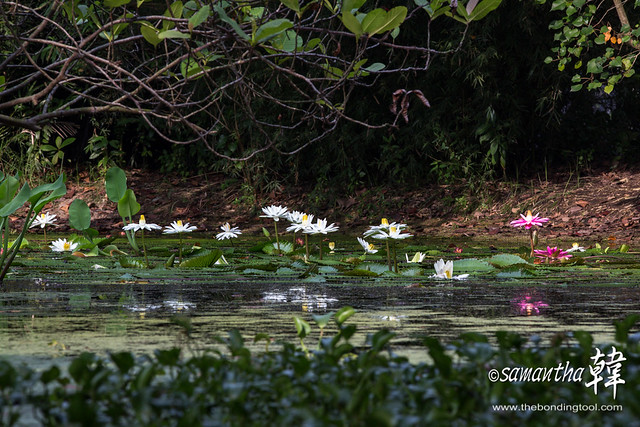 We’ll be back again and this time, I’ll be coming with a big “gun”, perhaps an 800mm L series lens? Lol…

28th July 2014 was the first time I visited Sungei Buloh Wetland Reserve. It was more interesting than I had anticipated! We had a great time during the few hours in this unique environment – this excursion totally blew me away! I am so glad I came.

All these excitement was stimulating our appetite. Time to eat!

Back at Bukit Batok’s BB 289 Food House, we settled down to lunch. While waiting for the food to come, we went through the shots we had. Everyone was cooing “Wow!” And when the food finally arrived, we went wow again, not only for the taste but the price, too!

There’s a lot to offer in the (north) west region of Singapore.

Our adventure did not end here. Check out my next post on *Xiang Ji Roast and our dessert after lunch

Admission is free (as of date of posting).

P.S. September and March is the best time to see migratory shorebirds or waders.