It has been said that “The best in Singapore is the best in the world” – they were, of course, referring to fine dining experience! And Singapore does have superabundance of regionally and internationally renowned food and beverage establishments.

However, from a restauranteur’s standpoint (I’m making an educated guess after talking to several managers/owners), tight-laced fine dining may not necessarily be the way forward in the present culinary world. There are only a handful of wealthy customers who could afford the luxury of fine dining and how many of this minority would actually fine dine on a daily basis on personal account? With inflation ongoing, I dare say many of these punctilious establishments need a new class of consumers. Their best bet is on the modern generation with trendy tastebuds but these youngsters do not have obese wallets like daddy has, and thus the birth of secondary or sister restaurants serving fares with adjusted price tags and baptised the second line as semi-formal or casual relax style.

Since I also do not have a father or sugar daddy with obscene amount of money, I am always delighted when I chance upon conscionable restaurants with great chefs offering affordable menus without compromising on taste experiences.

Last night, I had the pleasure to share flavours with Jerry (my friend of nearly 3 decades) at Tamarind Hill Restaurant in the handsome surroundings of the Labrador Nature Reserve in Pasir Panjang area.

The staff service was impeccable!

Just as I was approaching the restaurant’s main entrance, they “threw” open the doors and welcome me by name!
Yes, I made reservations earlier but to be greeted by name, now that’s what I dressed up for.

When Jerry suggested having Thai cuisine at Tamarind Hill, I was a bit reluctant because it was quite far away. I would have settled for a hamburger at The American Club but after seeing online photos of the fully-restored-colonial-bungalow restaurant, I knew I had to “location scout” to see if there’s any suitable grounds for sunset (this is west area of Singapore) and macro opportunities in the future.

“Set majestically atop Labrador Nature Reserve is Tamarind Hill, an elegant Thai restaurant that’s been part of Singapore’s vibrant dining scene since 2012. Barely three years old, it’s already received critical acclaim from the likes of Cuisine and Wine, which named it “Restaurant of the Month” just two months after its official opening.

Beyond its resplendent façade lies an equally luxurious restaurant and bar where aperitifs and signature cocktails like Tamarini, Pad Thai and King of the Hill are served before and after dinner. Here, diners can also find an extensive wine list that’s managed and attended by Rajeshwaran Gopal, one of the country’s best-known sommeliers.

Aesthetics and alcoholic indulgences aside, what sets Tamarind Hill apart is its authentic Thai food. The kitchen is headed by executive chef Wanthana Nikonsaen who, armed with years of restaurant experience, serves unpretentious yet tasty Thai cuisines, such as the delectable beef massaman curry and crispy duck breast served alongside green pea and eggplant tempura.” – Expat Living (Wine and Dine/Restaurants) 6 May 2013 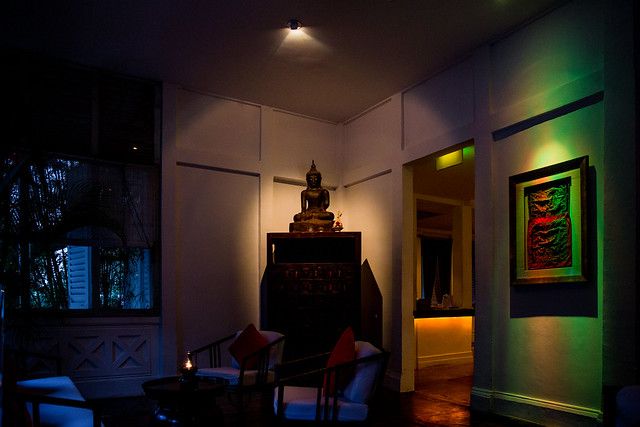 I was waiting here for Jerry when they served me the most delicious (complimentary) very chilled Tamarind Juice!

With that, I am honoured to take nourishment prepared by a woman Executive Chef Wanthana Nikonsaen, also affectionately known as Chef Phin. The reason for Chef Phin’s ambition to become a chef has to do with her childhood. During her younger days in Thailand, she would follow her mother shopping for groceries. She found it interesting watching her mother from picking out fresh ingredients at the marketplace to preparing meals in their home kitchen. She dabbled in cooking but her dad criticised – her cooking was not as good as mom’s. To prove her dad wrong, she decided to work hard to become a chef. Such dedication, I guess she must love her dad a lot! 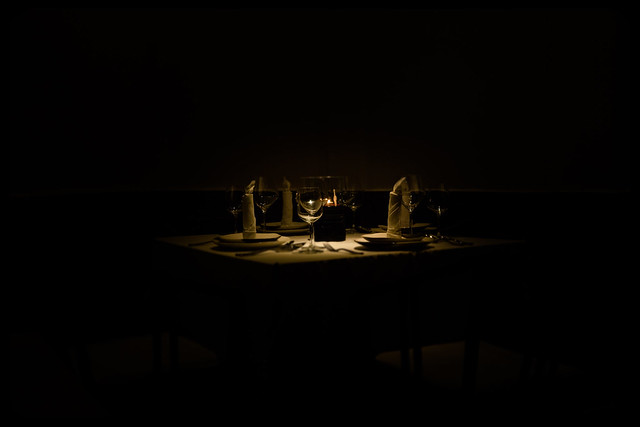 I haven’t been fine dining for quite a while now and was anxiously anticipating my meal.

“A knife is to a chef, what a brush is to an artist. The rush I get every time I hold a knife is indescribable – It excites me the same way some people do when they get behind the wheel of a luxury car, for example.” – Chef Wanthana Nikonsaen (Tamarind Hill Singapore) 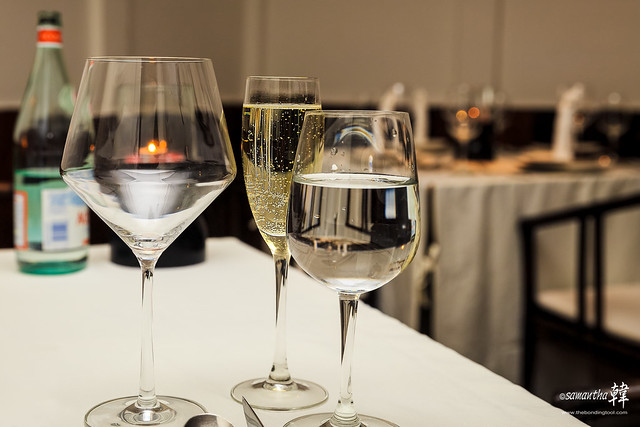 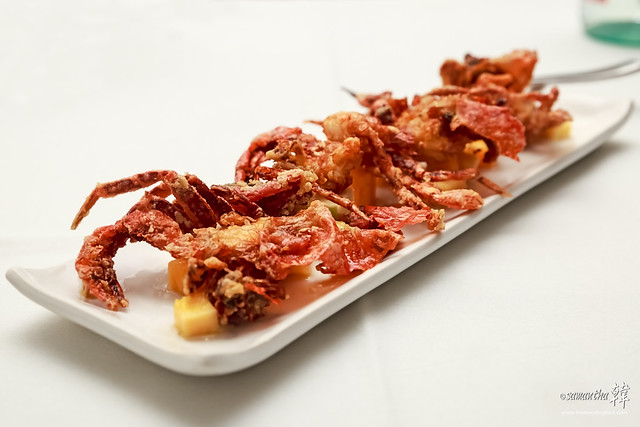 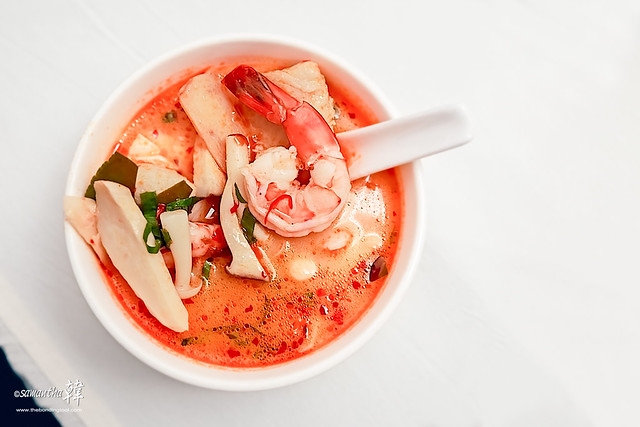 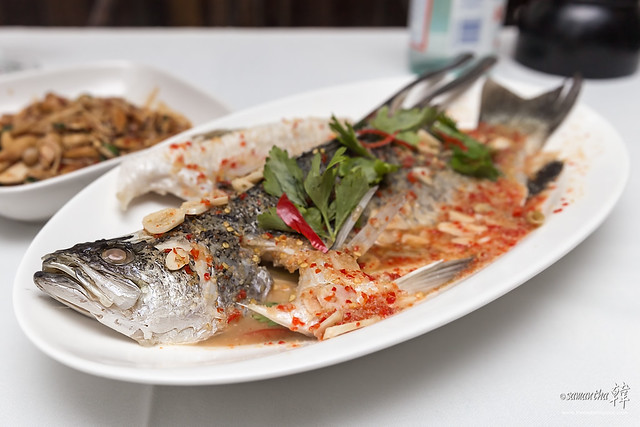 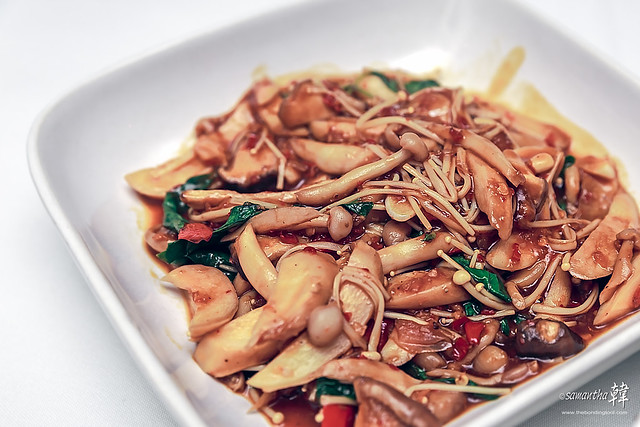 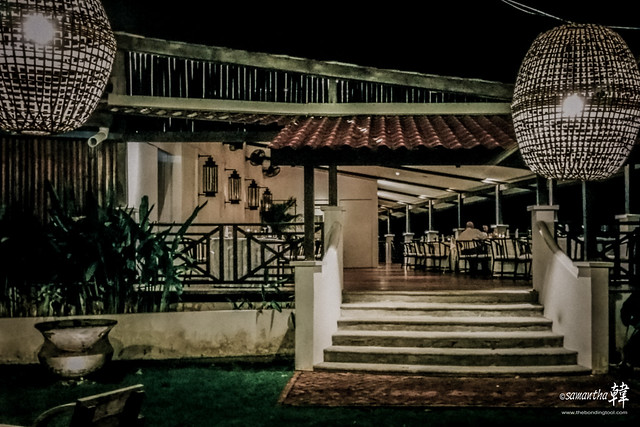 Outdoor seating area where we had desserts and coffee.
The staff already warned us about the mosquitoes but I didn’t expect them to be so ferocious! Several red welts popped within seconds and we rushed for our bill.
I must remember to bring some Deet next time I visit. I do like this place. 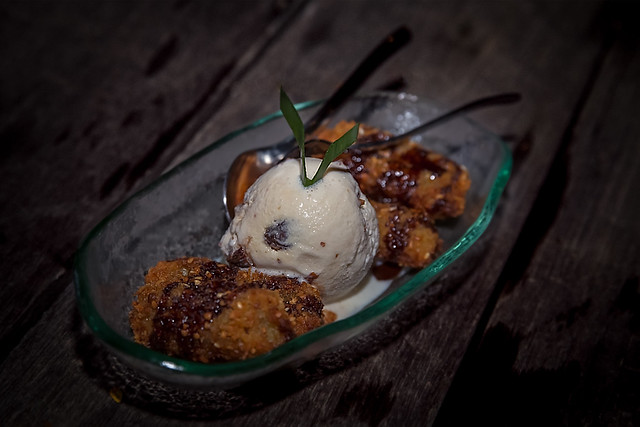 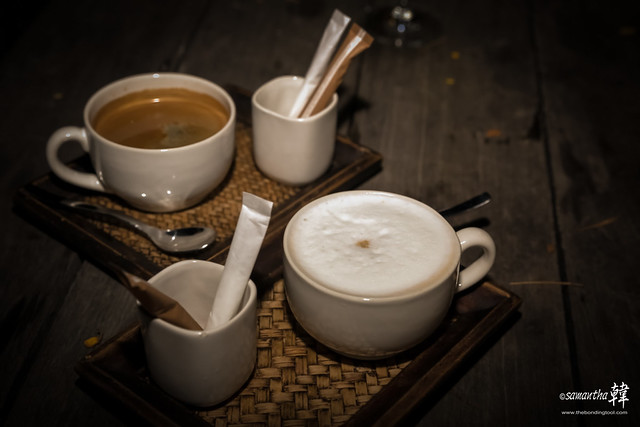 The soft shell crab was very crispy and light with no oily mouthfeel.

The red tomyum soup was my favourite, rich aromatic with the right level of sour and spiciness coupled with very fresh ingredients of mix seafood (fish, scallop, squid and prawn) and mushrooms.

Jerry liked the sea bass but I felt it was slightly overcooked and I also preferred more soupy broth.

The mushrooms’ texture was firm even though they were thoroughly cooked through, spongey and soaking up the hot sauce nicely. I’m sure Vanessa would enjoy them.

That said, the portions were indeed very generous for two persons. We’ve over ordered. I was stuffed!

I must say that the overall experience was wonderful and this is a place I would return for their Thai hospitality and, of course, to try out some wine since they have one of the best sommeliers in town. The laid back sumptuous greenery neutralised the killing pace of city living, a most welcoming detour in our hectic lives. When fine dining, we are not just paying for food (as in paying at a hawker stall) but for service and ambience; for how we felt as a being after the taste experience is digested. Did I find value here? Yes, I did. For a moment, my mind was allayed from the mayhem of recent dealings. I had peace and reconciliation. My conscience clear. If not for the annoying mozzies, I would have stayed longer.

(owned and managed by Samadhi Retreats)