After lunch, we journeyed on to Gua Charas, a limestone cave formed millions of years ago. The cave is taken care of by some Indian devotees who maintain the peaceful sojourn from donations of visiting locals and tourists, like us. Entrance or rather donations of MYR2 is clearly written on the box where donations are contributed. 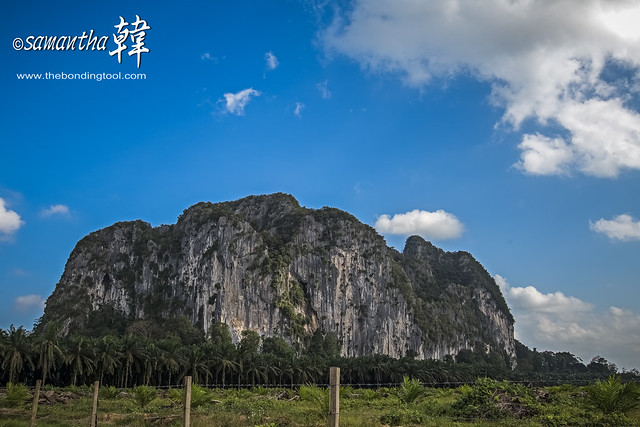 Charas Cave was formed millions of years ago.
It is maintained privately by some Indian devotees.
Entrance fee (or rather donation for maintenance of the Cave) to the cave is 2 ringgit per person.

Charas Cave lies at the foot of the imposing 1,000m-high Panching Hill and is clearly visible from the road leading towards Sungei Lembing town. In the Malay language the word ‘Gua’ means cave. Formed millions of years ago and carved out by the forces of nature these caves offer an interesting sojourn.

Housed inside one of the caves is a statue of the reclining Buddha. You need to climb about 100 cemented steps to reach the lower cave. It is lighted up and houses a statue of sleeping Buddha. Notable sites were rock formations resembling the goddess Kwan Yin, an elephant, a combing princess, a royal tombstone, a fish and a nostril.

Some further steps upwards, are other caves networks with openings. The walls of the caves are greenish blue because of the moss. From an opening, you get to see a panoramic view of the plain and the town of Kuantan in the far distance.

The temple is open to visitors from 8.30am to 6pm daily.

Location: About 25 km northwest of Kuantan at Panching on the Sungei Lembing road.

Take the road that leads to the entrance of the Chinese Temple. The road is 4 kilometers long and it goes in circle around the palm oil estate to circumvent the karst hills. Reaching the caves opening facing east. 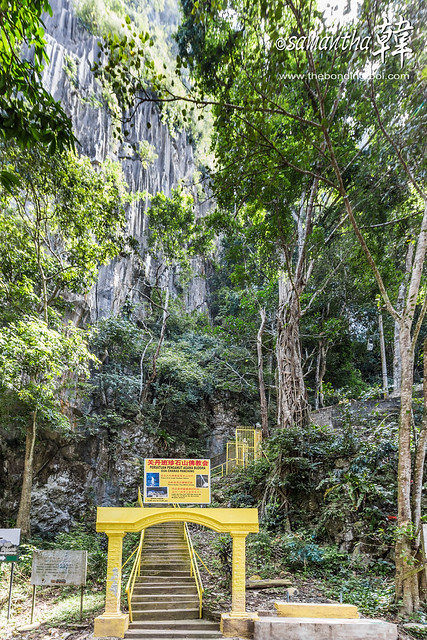 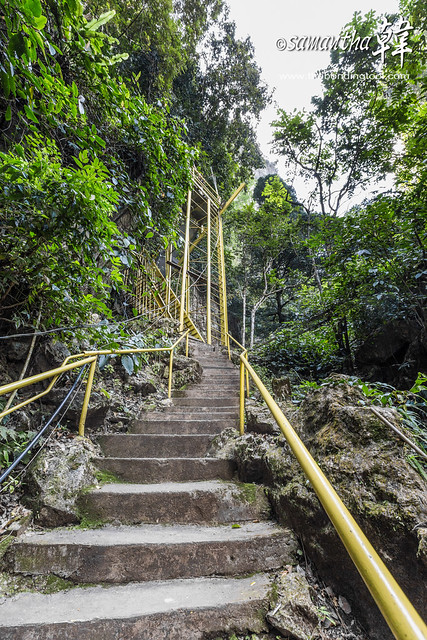 They are very steep which is a good sign but I do not know how high I have to climb and with about 11 kilos on my back, that kinda scared me. 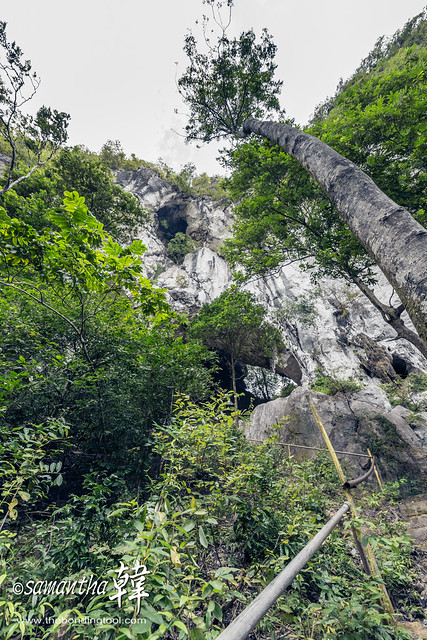 Pretty awesome just looking at the cave and I was quite determined to climb to the peak. 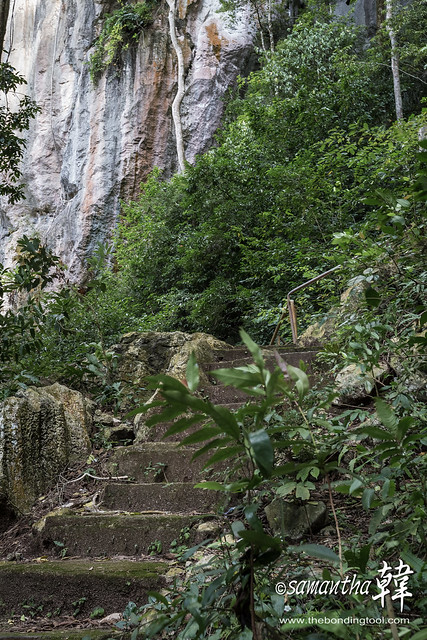 Don’t be fooled by the low steps as compared to Mt. Bromo, these are treacherous steps as trekking shoes had no grip on the slippery mossy and muddy stairs and pathways. 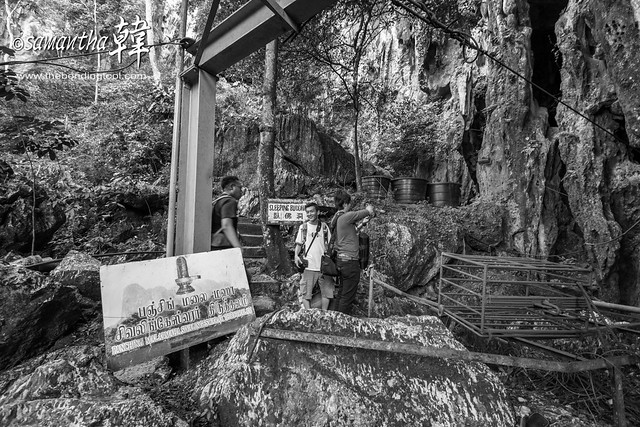 Finally, we reached the 1st station. 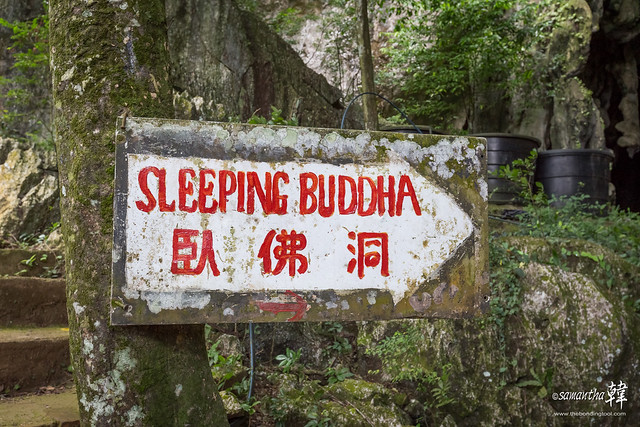 One of the features is the Sleeping or Reclining Buddha. 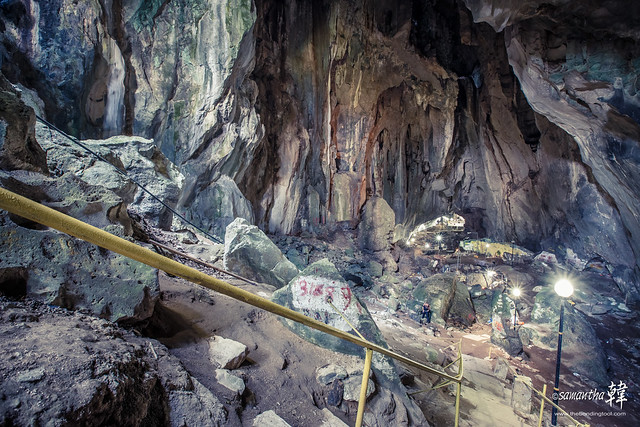 Amazing sight!
There electrical (or fuel powered, I’m not sure) lightings inside the cave. 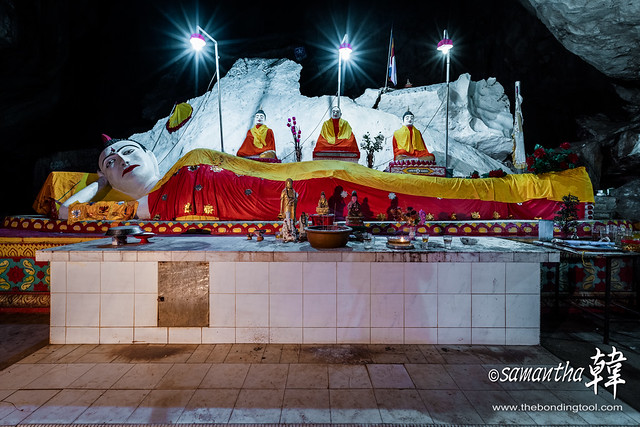 The Sleeping Buddha.
It is said that at certain time of the day, holes in the cave cast rays of lights onto the buddha that seemingly give it a holy aura. 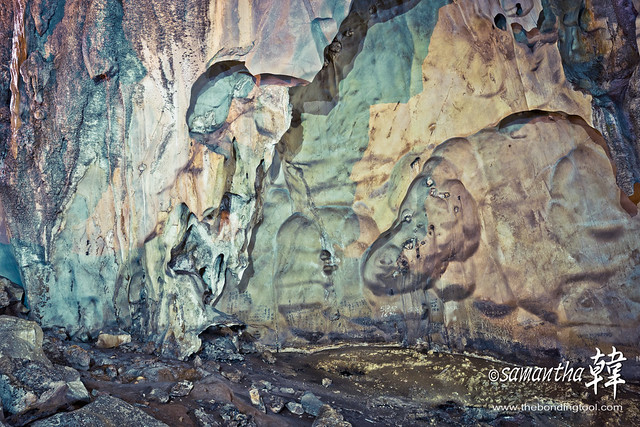 Do you see anything on this rock formation? 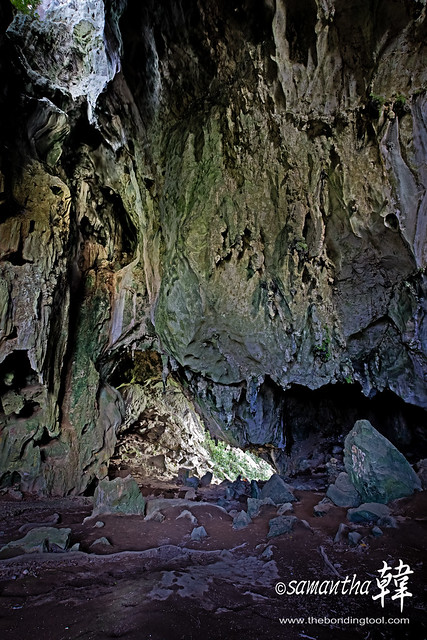 How about this one?
I saw something but only when I was taking pano shots (5 images) for this picture.
This is also the second station, the peak of the cave which we were allowed into. 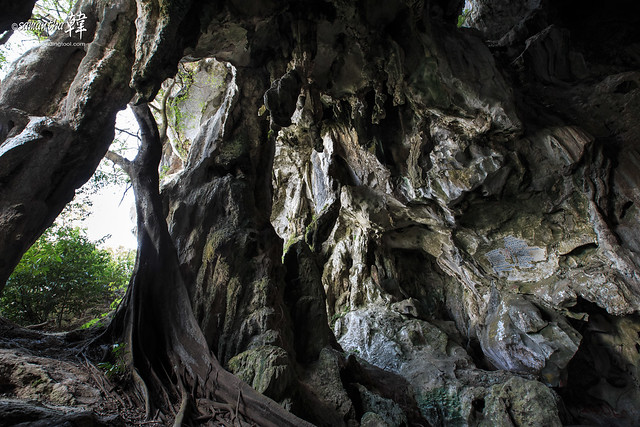 This is the top but we can’t see much outside as trees were blocking the view.
The grounds were dry but still very slippery!
Mr. Aw slipped and fell here on his way out of the cave. 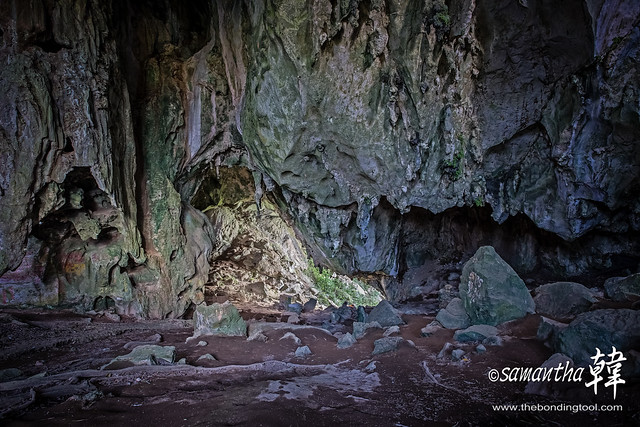 I think I saw a face, perhaps of a monk of holy man, near the exit in the middle of the picture (on right of exit).
Do you see it, too? 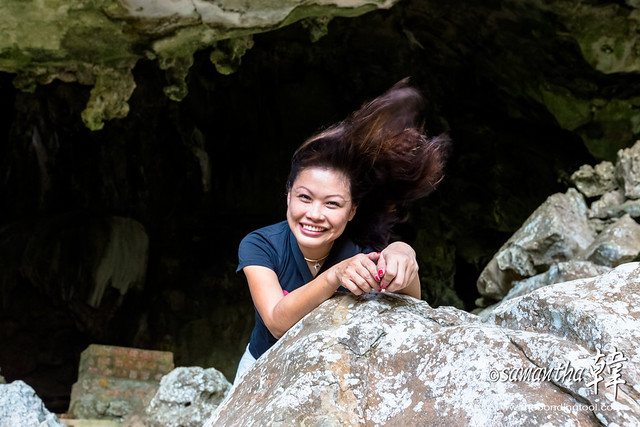 Finally out of the cave but the wind was blowing so hard, I had to slow down.
The chill was getting to my bones. 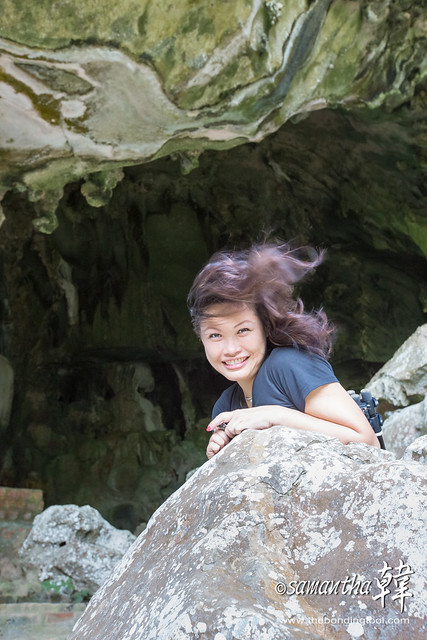 So why not take a picture as I was resting?
Desmond who took these photos (this and the one above) of me was wary of his predicament, handling the camera with kid gloves, lol…
On hindsight it was amusing but there and then, we were on the qui vive of our faithless environment!
Gotta run, the rest were waiting for us. We have one more stop to make before Pollock Resort, where we would be having dinner and rest for the night. 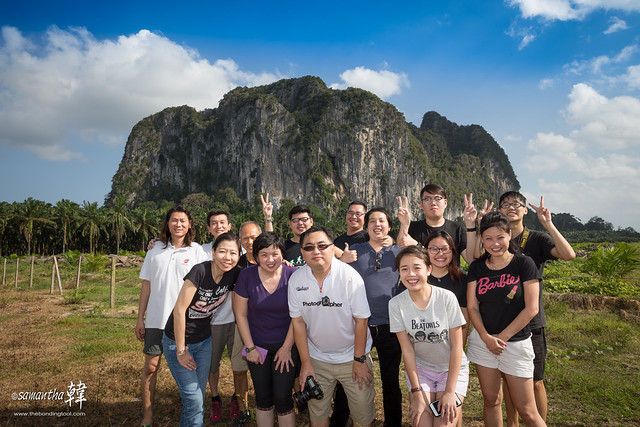 A quick group photo before journeying to Pandan Waterfall. 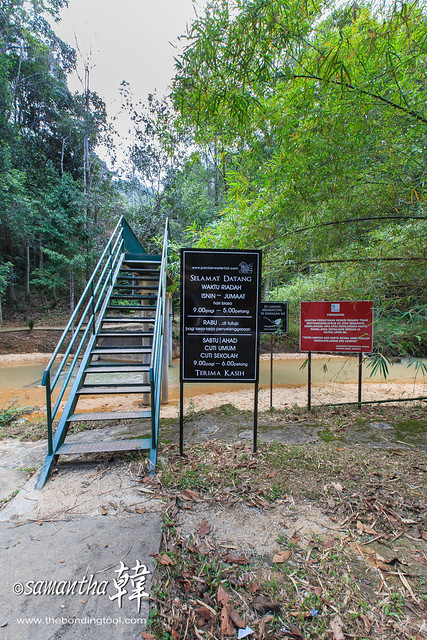 We had to cross this bridge to get to the Pandan Waterfall located at Berkelah Forest Reserve. 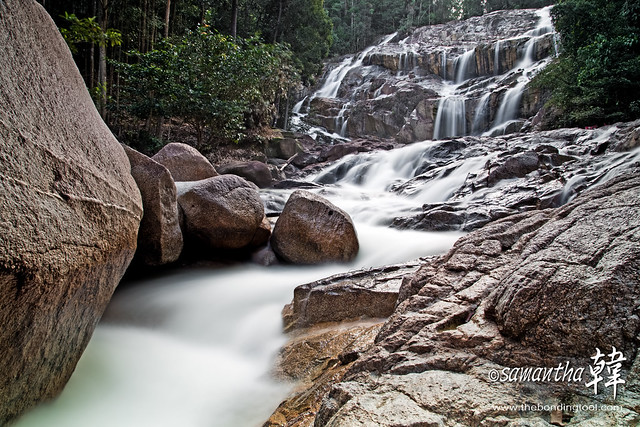 “Many a calm river begins as a turbulent waterfall, yet none hurtles and foams all the way to the sea.” -Mikhail Lermontov 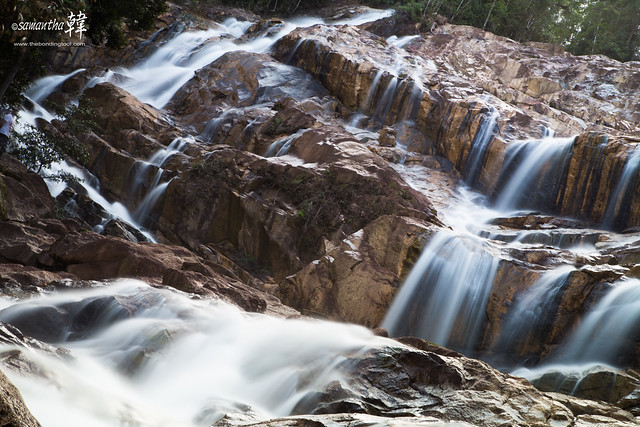 Upper portion of the Pandan Waterfall. 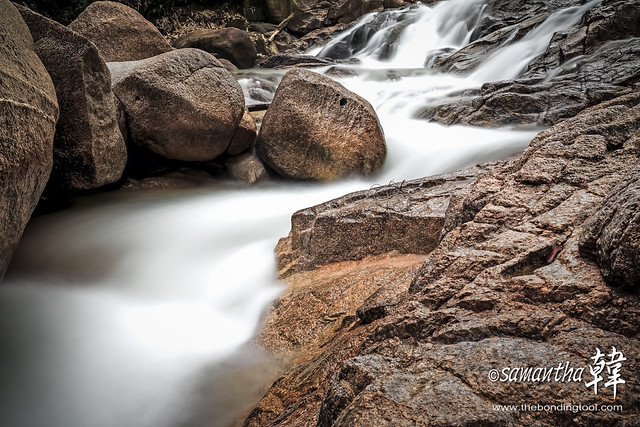 “I love the sounds and the power of pounding water, whether it is the waves or a waterfall.” – Mike May

At about 6pm, the park ranger blew his whistle and that signalled us to get out. The sun came out suddenly displaying wonderful rays!

Sharks! My cam juice was gone but there is Hope!

Hopey Belinda Aw lent me her battery and I took a quick shot at this with half a mind looking out for the ranger and the other half catching up with the rest who were already boarding the bus. 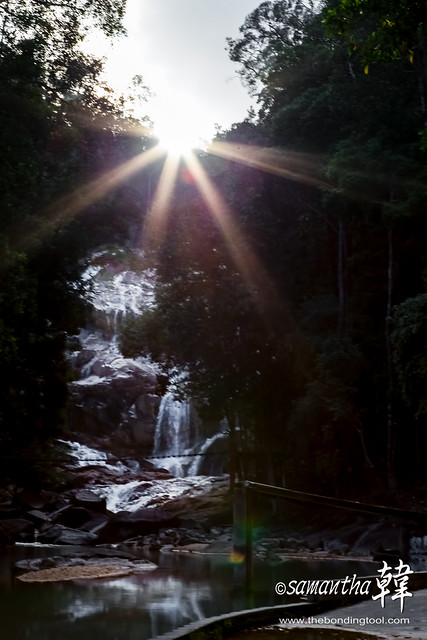 This may not be a good shot but it is one for the record, surely!

I didn’t know there was a sniper behind me, lol…
Photo courtesy of Desmond Ngan.

I didn’t know there was a sniper behind me, lol…
Photo courtesy of Desmond Ngan.

As we arrived into Sungei Lembing town, Michael said, “Instead of having *Sio Bak with kopi (roast pork belly with coffee) for supper tonight, why don’t we head there first before going to Pollock?”

And so we charged forward to what the highlight of this trip actually was for us foodies － *Siew Yoke! 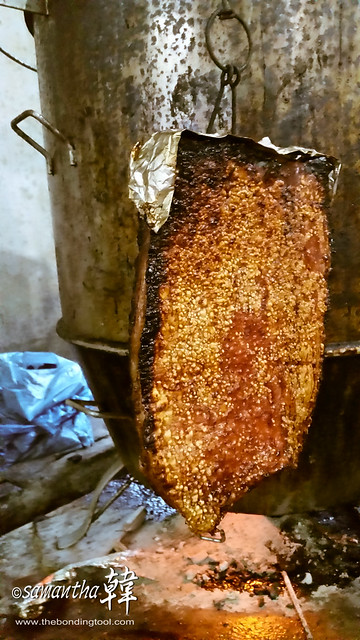 Roasted from the traditional broiler.
Photo courtesy of Desmond Ngan and edited by me. 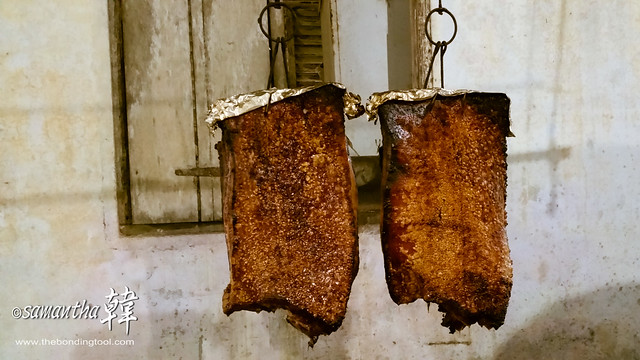 The crispy roasted pork was allowed to rest a bit before chopping.
Photo courtesy of Desmond Ngan and edited by me. 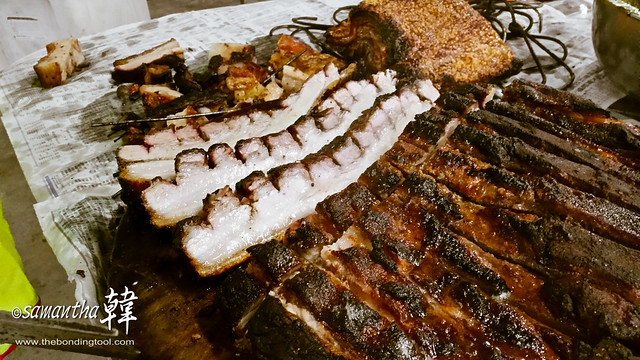 Everyone was excited at sinking their teeth into these scrumptious pork belly.
Photo courtesy of Desmond Ngan and edited by me. 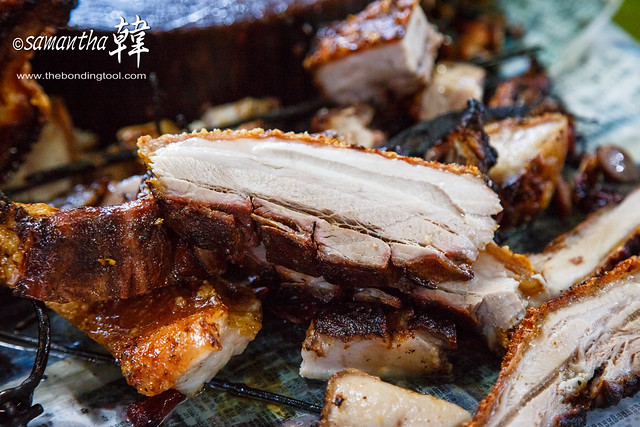 Roasted Pork strewn on newspapers?
This would not pass in Singapore but who cares? A local saying goes, “rubbish eat rubbish grow!” 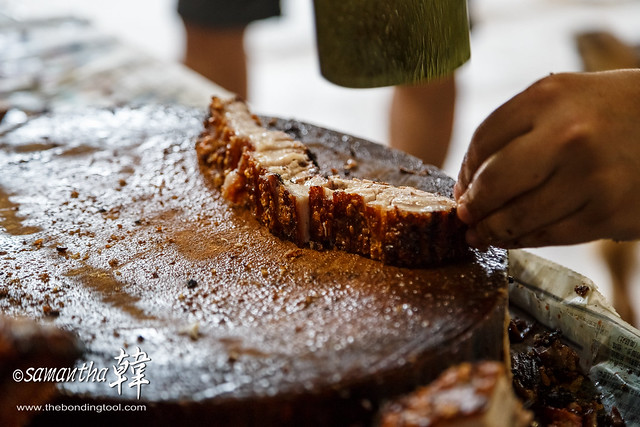 I could hear the crunchy crackling give way with each clean chop of the cleaver. 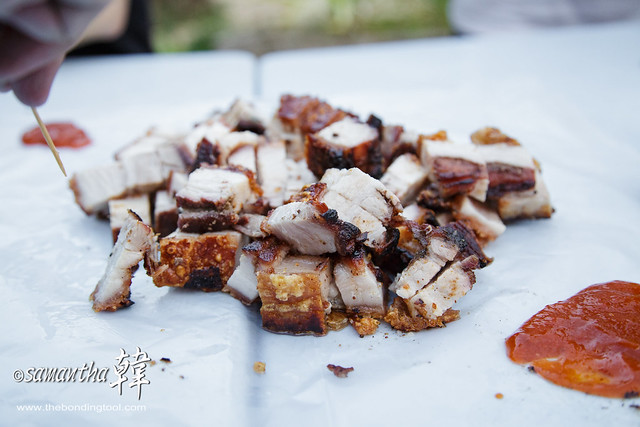 Straight off the traditional broiler!
Golden charred crispy crackling with juicy chunks of meaty bite that melted in the mouth after a few chews. 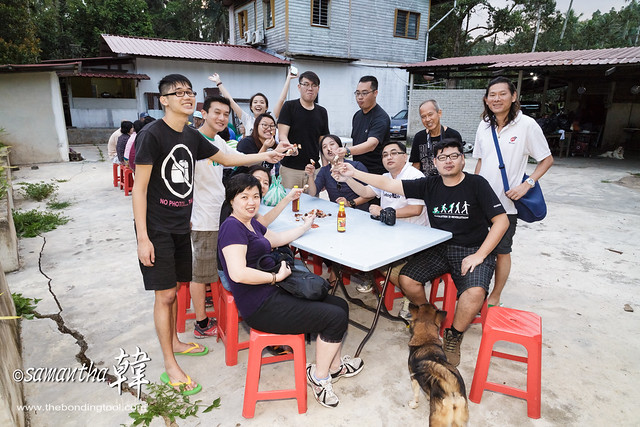 We ate 1kg of Lembing Roasted Pork here and took away another 2 more kilos.

Do we still have room for dinner???

Operating hours: Saturdays and Sundays ONLY!
Saturdays in the evenings at the above premise.
They are available at Pasar Sungai Lembing on Sunday mornings.

Our photography outing was lead by Michael Lee of Xing Asia (亚洲行). You may contact him at: [email protected] or visit their website: http://www.xing-asia.com/

Some of the photos were, as indicated, contributed by Desmond Ngan.