The legacy of the Samsui Women is a big part of our history and early developments as a nation. It is believed that an influx of approximately 200,000 Samsui women came to Singapore from China between 1934 and 1938, and this continued until 1949 when emigration from China was declared illegal here. Today, there are less than 100 Samsui women left in Singapore, all of them in their 80s and 90s, with perhaps a few centenarians.

It was probably derived from the place where most of them came from – Sanshui of Guangdong (Canton) Province in China, besides Shunde and Dongguan. About 90% of the Samsui women are Cantonese and the remaining 10%, Hakkas. Samsui woman or 红头巾 in Mandarin which translates as “red bandana”, a reference to the trademark red cloth headgear that they wore.

Although there were exceptions, the majority of the Samsui women took vows to not marry before coming to Singapore as cheap labourers, working mainly in the construction industry and *other manual labour jobs. Their contributions can be seen even to this day in the conserved pre-war houses built during the colonial days, right up to our nation building as an independent country in the earlier phases of HDB flats (public housing) and older commercial buildings.

*Some of the women from Sanshui also worked as lived in domestic servants for the rich families, commonly known as Ah Sum or Ah Ma Jie (aka the ‘white and black’ due to the white cotton jacket and black pair of pants they wore). These women with pigtails or with their hair fashioned into small buns usually have monikers beginning with an ‘Ah’ and their actual names remained unknown. But that’s another story, sorry I digressed.

Samsui women also had a crusty reputation of rejecting jobs involving drugs (particularly opium) peddling, prostitution, or other vices, thus most of them had to live in poverty.

Most Chinese in Singapore lived in Chinatown and that’s where the Samsui women dwelled. Because they were living in subsistence level, the Samsui women of Chinatown only get to eat chicken annually during Chinese New Year. Their favourite cooking method for the fowl is poached or steamed, brushed the cooked bird with some sesame oil and served with ginger dips which they believed is “warming” and could get rid of “wind” in their bodies (the TCM ying yang food theory).

Soup Restaurant’s “Samsui Ginger Chicken” is prepared in the same traditional way or so they claim.

The whole chicken is steamed-cooked for a pre-determined duration and temperature, thus, maintaining the rich chicken aroma and taste. The art of consuming “Samsui Ginger Chicken” is by dipping the chicken into ginger sauce and wrapping them with fresh lettuce.

The Samsui women of Chinatown may have faded away but the legend of our Chinese Heritage Cuisine is here to stay and it will remain forever. – Soup Restaurant 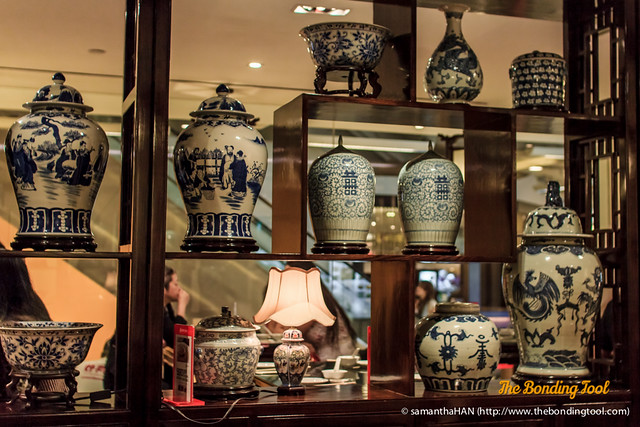 Today, the decor of the restaurant is more upmarket with “antiques” featured on rosewood racks.

1991 was the first time I ate at Soup Restaurant located in Smith Street. Valerie was a toddler then and I did not cook much. Drinking double-boiled soup is a big part of my family culture. My mom is insistent of having soup daily which we would consume a couple of hours before dinner.

The secret of a nutritious Chinese soup lies in the broth which takes hours (from 2 to 8 hours, sometimes longer). Since young working adults do not have the luxury of time to double-boil soup at home, Soup Restaurant became popular rather quickly with this consumer group. It is now a listed company.

This is also the place where my children frequent when they want affordable light meals and wholesome soups in their diets. 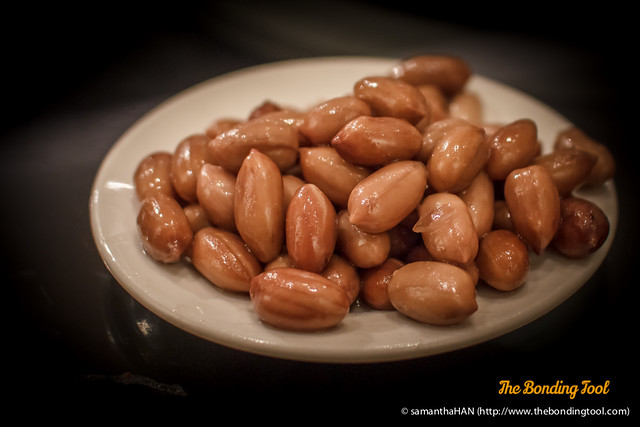 Stewed Peanuts.
The ones served here are bigger and a tiny tad tastier than most restaurants we have tried. 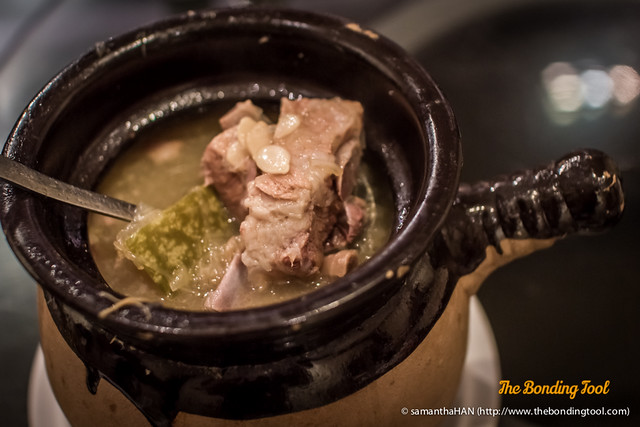 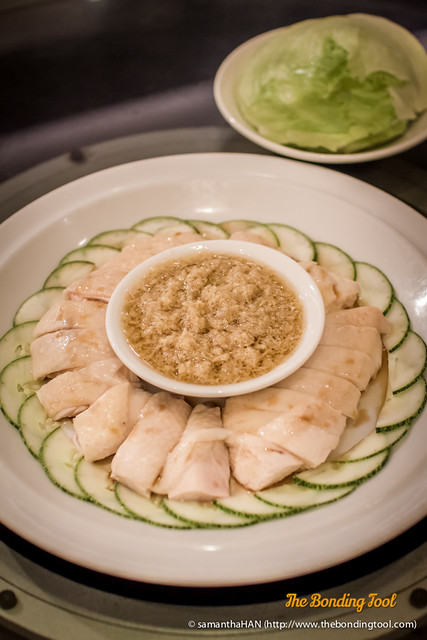 Besides the indulgence of a good double-boiled herbal soup, a trip to Soup Restaurant would not be complete until you have sampled their signature Samsui Ginger Chicken.
The chopped boneless pieces of succulent tender chicken is arranged around a saucer of aromatic minced ginger surrounded by thin slices of cucumber.
It is served with a platter of crisp lettuce leaves on the side.

We usually dip the chicken into the ginger and eat it with plain rice but a refreshing way to savour this dish is to put the chicken onto the lettuce which acted as a crunchy wrapper, slather on some ginger mince and enjoy the complementary burst of flavours. 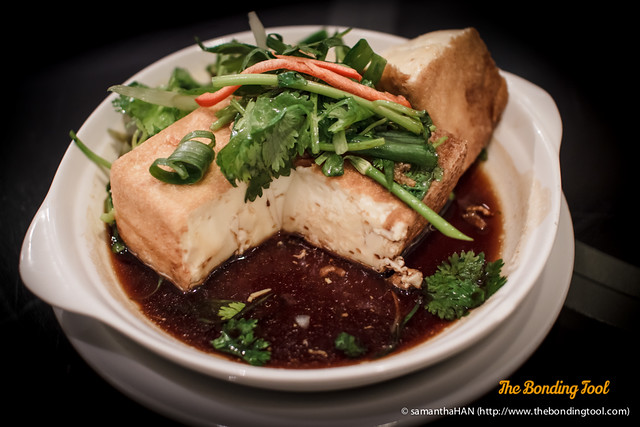 Hometown Tofu is the restaurant’s “homemade” tofu dish to evoke the taste of the simple life in old Chinatown. 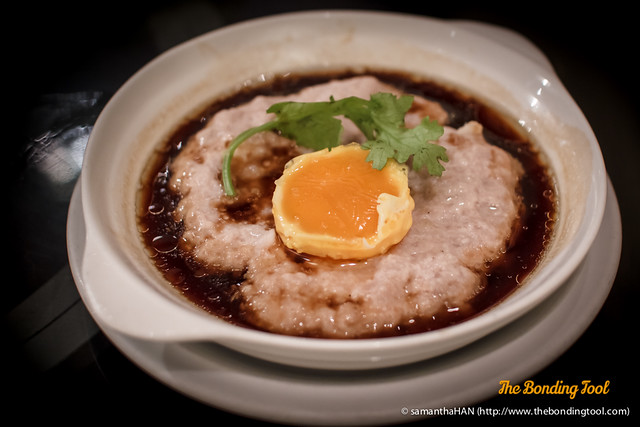 Steamed Pork Patty with Salted Egg Yolk.
Another home-cooked style dish that is popular with us. 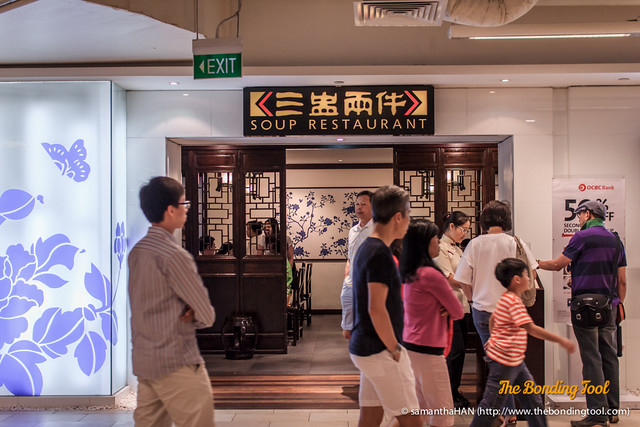 Your orders are usually taken while you are at the (long) queue so that when you are seated, the meal is served as quickly as possible.
Weekends are best avoided but unfortunately, that’s the time most people have to enjoy a bonding meal with their families.