If you’ve had Chinese Spicy Beef La Mian like the one I had recently, you probably thought this dish originated in Shanghai or Beijing…

The Lanzhou La Mian (拉面 pulled noodles) you see today was invented in 1915 by a Hui Muslim named Ma Baozi (马保子). And the thing that makes the beef stock delicious, is that it’s not made from beef at all. The best soups only use the meat of a yak!

Lanzhou beef noodles as we know the dish is said to have originated with Ma Baozi (马保子,1870-1955), a member of the Hui nationality, in Lanzhou at the end of the Qing Dynasty. He first sold his noodles of the street, and achieved such fame fame for their tastiness that in Lanzhou they became known as “Ma Baozi Beef Noodles.” In 1919 he opened his first “bricks and mortar” shop. Today, there are around 1,000 beef noodle shops in Lanzhou. The traditional characteristics of Ma Baozi Beef Noodles are said to be “one clear, two white, three red, four green, five yellow” (一清、二白、三红、四绿、五黄), a reference to clear soup, white daikon radish, red chili oil, green cilantro and yellow noodles. (The use of an alkali imparts a yellowish tint to the noodles, which use no egg.) ~ Gary Stevens a.k.a. Gary Soup (http://www.noodles.guru/2010/08/in-earlier-post-i-documented-my-love.html)

For a true taste of traditional la mian

trace the hand-pulled noodles back to the streets of Lanzhou.

A good bowl of Lanzhou la mian conjures its Silk Road roots. La mian translates from Chinese as “pulled noodle,” which refers to the athletic technique used to make the ribbons of pasta. It is also the name of an aromatic beef soup made with these smooth and slightly elastic noodles. A blend of spices and herbs—cumin, star anise, turmeric, and fresh cilantro—gives the broth a vibrant flavor and subtle whiffs of distant trading posts in India and the Mediterranean.

La mian (pronounced “la mee-en”) originated among the Hui people of China’s northwestern Gansu province during the Tang Dynasty (618 to 907 C.E.). In that era, the provincial capital, Lanzhou, became an important commercial hub on the trade routes that brought Buddhism and Islam, along with an array of new spices and culinary customs, to central and eastern Asia. Over the centuries, la mian developed as a traditional food of Hui Muslims, who remain the prime purveyors of the dish.

La mian migrated eastward during the 20th century, and these days, pulled noodles are a staple of China’s working class in nearly every major city, eaten as an inexpensive snack at any time of day. In Shanghai and Beijing, hundreds of la mian shops stay open from daybreak to well past midnight.

The noodles are made by hand, in a familiar sequence of maneuvers and sounds that can be witnessed in alleyways all over China. The chef, dusted in wheat flour from belt buckle to skullcap, often puts on a show in his shop’s front window.

He slams a ball of dough onto a steel table, rolls it into a flour-coated cord, stretches the cord, twirls it like a jump rope, and smacks it on the table’s surface. With a magician’s adroitness, the noodle maker pinches the ends of the cord together to form a loop, then spins the loop vertically, causing the dough to coil around itself into a long braid. He smashes the braid on the table, sprinkles it with more flour, and stretches it out to its original length.Then he twirls, loops, and spins it again. As he works the dough, its proteins bind, adding strength and elasticity. And each time he repeats the steps, he builds a more complex structure of fibers along the length of the braid. He does this again and again, and with every repetition the strands double in number—8, 16, 32, 64—and become thinner and thinner. A dozen quickly executed repetitions can produce thousands of delicate, threadlike noodles.

From shop to shop, chefs incorporate different ingredients into their recipes. “To make the noodles elastic, you need to use an ashen powder made from peng cao, a grass that grows on Gansu’s high plains,” explains noodle maker Wang Chen Xiang, as he slaps and stretches dough in an old shop in Shanghai. “And the thing that makes the beef stock delicious,” he says with a smile, “is that it’s not made from beef at all. The best soups only use the meat of a yak – every good la mian seller knows that.”

How to Make Lanzhou La Mian 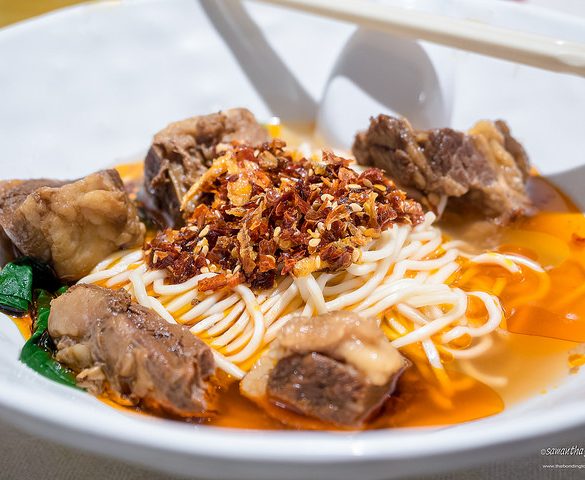