Steven and I travelled to Malaysia for landscape photography just around midnight last Friday.

We didn’t get the Milky Way shot we were hoping for but we had fun at the beach shooting sunrise. 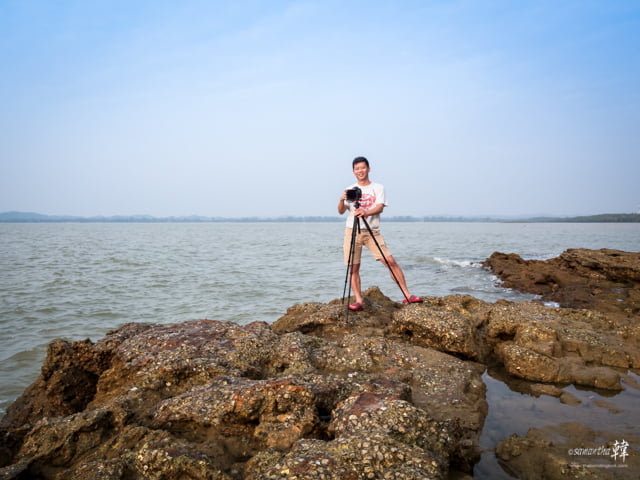 On our way back to Singapore, we made a stop at the famous Kiang Kee Bak Kut Tea (Teh) 强记肉骨茶 for a hearty brunch! We turned on the GPS and were on our way to Kiang Kee somewhere in Kota Tinggi. I remember it was a standalone restaurant along the rural roads and one could easily miss it but not this time, we found it after 1.5 hours of driving from our last destination.

There were many cars parked in the restaurant grounds as expected when we arrived around 9.40am. The place operates from 7.30am till 12noon or until sold out. Many families were already enjoying their breakfast (if you consider meals taken before 10am as breakfast). The grounds are huge and the turnover was pretty fast as most families spend at most an hour there (eat-and-go type of place) so we found a table without trouble.

I went to order the food at the front end of the restaurant. There’s a written guide on how to place your order at the service counter.

I had placed an order of Bak Kut Teh (BKT) for two persons. I wanted a bit of everything in version (organ meat and what have you) so I asked her what’s inside the mixed version. *She told me that there’s this, this, this, etc… etc… pointing to several items on the counter. She then offered the enoki mushrooms and small intestines which I gladly accepted. I turned to my right and caught a glimpse of the fried bean skin (fu chook) and she said that’s inclusive in the BKT. I also ordered a plate of vegetables and otah which was my favourite dish from my last visit. I saw the youtiao and recalled it was a no go for my palate and skipped that. Three bowls of rice and two drinks. They did not give us any receipt this time but total came out to be $51 Malaysia ringgit.

*Note: When she pointed this this this and this, I thought a mixed version would have those but alas either my bad Mandarin or throaty voice could have led to a communication breakdown somewhere. There weren’t any braised pork belly and pig’s stomach which I had taken for granted came in the mix version. Or did she think I only wanted the enoki and small intestines?

This is Steven’s first visit to Kiang Kee

The food came in whatever’s ready will be served first kind of fashion. A young lady with a tray of green cut chillies in dark soy dip came to our table and asked how many diners were eating before laying the number of chopsticks, soup spoons and chilli dip onto the table. Next came the drinks and the soon the rice. The vegetables took about 3 minutes. 160 seconds later, the steamed otah arrived. While the lettuce looked luscious and inviting, the otah didn’t quite meet my expectations.

The fish seemed undercooked and the spicy egg custard was not yet firmly set. I took a bite and confirmed that it was a letdown – soft starchy filler type of fish paste with translucent bits of fish when I first broke into the otah with my chopsticks. On our journey there, I had claimed that their otah was one of the best I have eaten. I swore it was as good as those sold in Muar if not better – rich aroma of the spices in the smooth yet springy textured coconut egg custard punctuated with meaty pieces of fish. Now I feel like a fraud!

Before I could find dig a hole and hide myself, the simmering hot BKT arrive. Ah, my saving grace! Steven took a sip of the soup and turned towards me. His flashbulb eyes told me he’s excited about the broth! I quickly dug into the redeemer. It was almost orgasmically good! I said almost because as we dine, the broth became oily and murky with a hint of slimy feel. I can only pin the blame on two suspects, the deep-fried bean skin and the (overcooking of) enoki mushrooms.

The ribs were infused with meaty herby flavour and the texture was tender enough to the bite but not fall off bone kind of tender. Small intestines had good chew and not rubbery. Thumbs up in overall taste.
For fussy eaters, I would recommend that you ask the order-taker to serve separately the crispy bean skin in a bowl of broth and not to overcook the enoki mushrooms.
If Ric had come along which he backed out last minute, we would have ordered this dish. Yummy collagen loaded stewed pork knuckles/trotters which is another very popular item. Almost every table had one of it.
The charcoal is literally overflowing from the shed!
What a delightful discovery when I saw the young cook using a mesh ladle to sieve out broth scum!
While GPS-ing Kiang Kee on our mobile app, two Kiang Kee Bak Kut Teh popped. Please note that the famous Kiang Kee Bak Kut Tea 强记肉骨茶 Do Not have any branches! And that the Bak Kut Teh is spelt as Bak Kut Tea on premise.
Steven do not usually eat the ribs and I told him there’s pork belly inside. Apparently, there’s some miscommunication when I ordered.