I didn’t know until now but Michelin star awarded Din Tai Fung is ranked as one of the world’s Top 10 Best Restaurants by The New York Times.

“Din Tai Fung established its reputation and have been highly praised by the media including being selected as one of the top ten restaurants in the world by the “New York Times” on January 17, 1993. In November 2009, the restaurant’s first Hong Kong branch at Tsim Sha Tsui (尖沙咀), Silvercord Branch (新港店), was awarded one Michelin star by the Hong Kong and Macau 2010 edition of the Michelin Guide. In December 2010, the restaurant’s second branch in Hong Kong at Causeway Bay, Yee Wo Branch (怡和店), was also awarded one Michelin star.” Info credit- Wikipedia

“Michelin star awarded and ranked as one of the world’s Top Ten Best
Restaurants by The New York Times, Din Tai Fung has its roots dating
back to Taiwan 40 years ago. This authentic Taiwanese restaurant has
been making waves with branches throughout the world, including
Singapore, Thailand, Australia, China, Hong Kong, Indonesia, Japan,
Malaysia, South Korea, and USA”. – from the website of Din Tai Fung 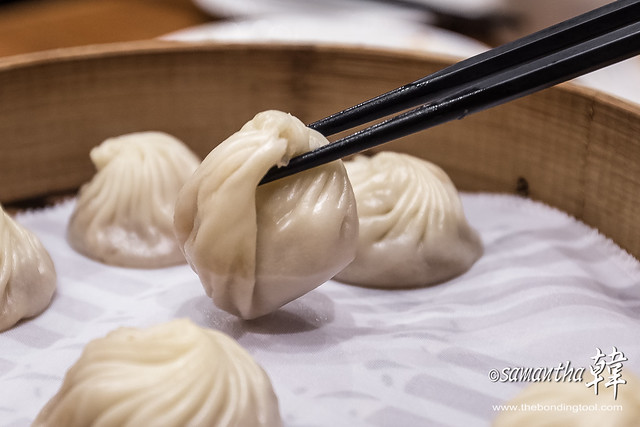 Careful not to break the skin or we’ll lose the best part of XLB, the delicious soup!

Traditionally, these dumplings contain minced pork wrapped in a delicate dough, which is then pleated, twisted at the top and steamed. Din Tai Fung’s signature rendition consists of juicy meat filling with broth wrapped in a melt-in-your-mouth skin with a minimum of 18 exquisite folds.

“The founder of Din Tai Fung was a man called Bingyi Yang. Born in 1927 in China’s Shanxi Province, he moved to Taiwan as a young man in search of better prospects. His first job was as a deliveryman at a store called Heng Tai Fung, which sold cooking oil.Impressed with his hard work, the owner quickly put Bingyi in charge of the oil store’s accounts after just two years of service. But due to other business losses, the oil store was forced to shut down, leaving Bingyi unemployed.

Bingyi decided to start up his own oil shop with wholesale oil purchased from Din Mei Oils. To show his appreciation to his first boss at Heng Tai Fung, he named his new store Din Tai Fung.

However, when tinned oil went on sale around 1972, sales at Din Tai Fung plummeted. Taking advice of a friend, Bingyi and his wife turned half of their shop towards making and selling steamed dumplings. The quality and exceptional taste of Din Tai Fung’s steamed dumplings attracted many customers and the business took off thanks to its strong word-of-mouth. Spurred on, Din Tai Fung stopped selling oil and turned into the full-fledged restaurant it is today.

This was the humble and inspiring beginning of an international brand – Din Tai Fung.” Info credit – taken from their website.

There are many dishes available here and not just various XLBs. I prefer the outlet at Wisma better than the one I had eaten before at Sentosa.

We don’t always get good shots or good food during/after a photography outing but having good company is usually a certainty! Photographers (hobbyist and professionals) can be quirky and hot tempered but you get to form your own group with choice peeps whenever there’s a walkabout session. In this instance, I had great company although the fireworks at GBTB (From A Distance!) was… Well, to put it mildly, a little disappointing! Seow’s family, Washiyama, Zexsen and I proceeded to MBS for dinner afterwards.

Some food is termed as “comfort food”.

Comfort foods may be consumed to positively pique emotions, to relieve negative psychological effects or to increase positive feelings. The term was first used, according to Webster’s Dictionary, in 1977. – Wikipedia

Traditionally, comfort food is eaten to provide the person eating it a nostalgic or sentimental feeling. Comfort foods frequently contain a high carbohydrate level and a simple preparation (for those cooking it at home). The soothing element most comfort food has, may be definitive to either that particular individual or to a specific culture. Looks like a hi-carb diet is called for this trip after the lo-down. I need carbs! 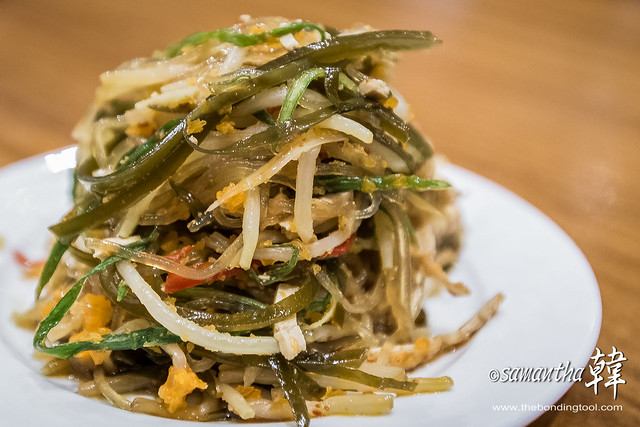 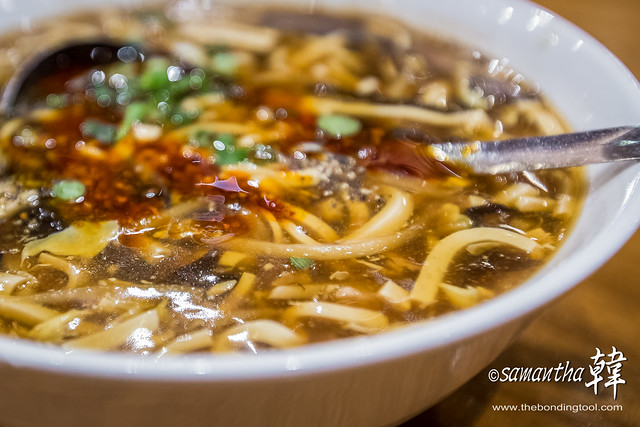 Hot & Sour Soup 酸辣汤.
Sour, spicy and savoury notes combined with a smooth, comforting texture make this classic Chinese soup a perennial hit with the locals. This dish is stimulating to the palate for dishes ahead.
There’s a promotion (1st Sep – 31st Oct 2014) going on for this dish at S$8. All customers spending above $90 will get a complimentary bowl with a choice of original or spicy flavour.  Customers spending a minimum of S$80 and paying with OCBC bank card are entitled to a S$5 voucher on next visit. 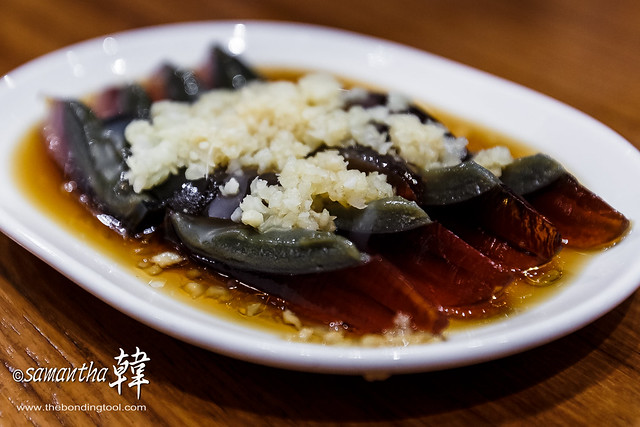 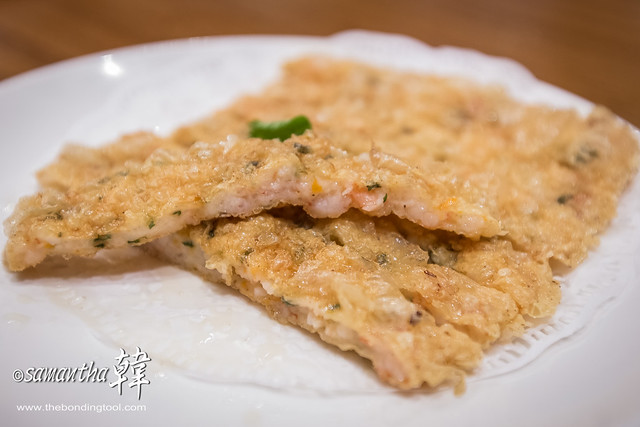 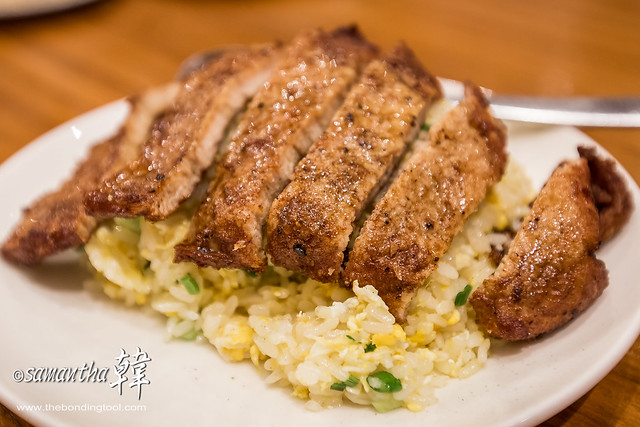 Fried Pork Chop Rice 排骨蛋饭.
Each plate is of a certain weight and minimal seasoning is used so that the natural fragrance of the eggs and spring onions shine through. 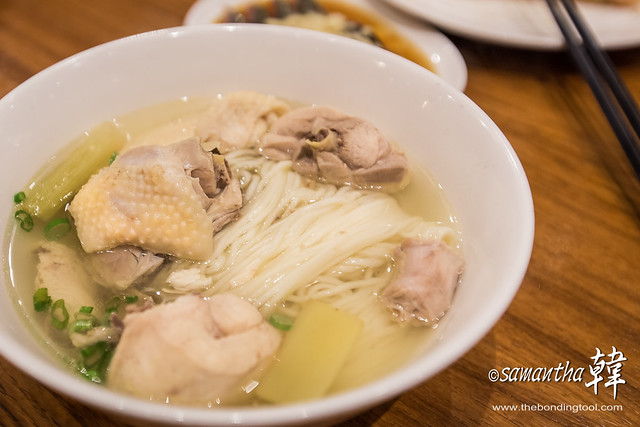 La Mian (Noodles) with Clear Chicken and Broth.
The chicken with soup came separately from the plain noodle but Seow ask the staff to pour it over. 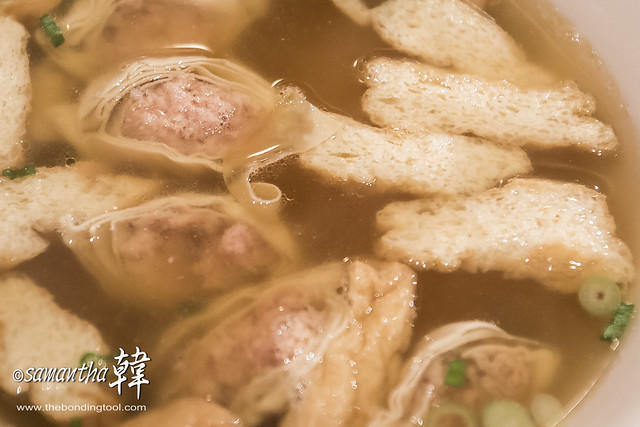 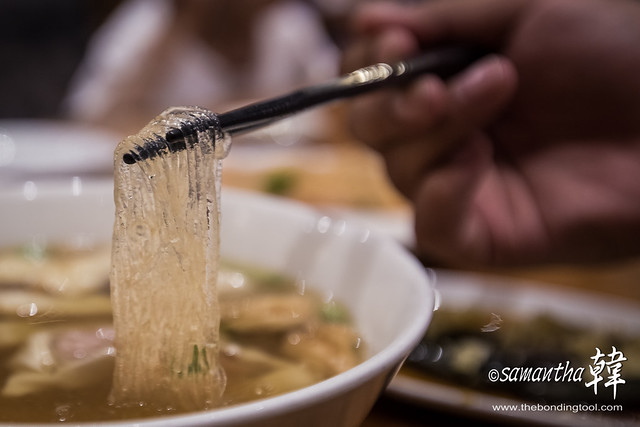 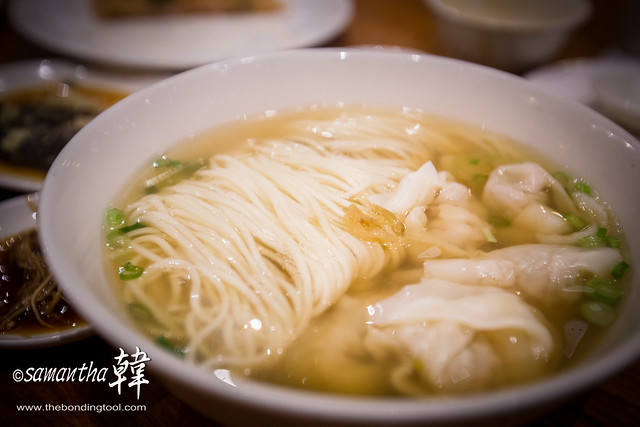 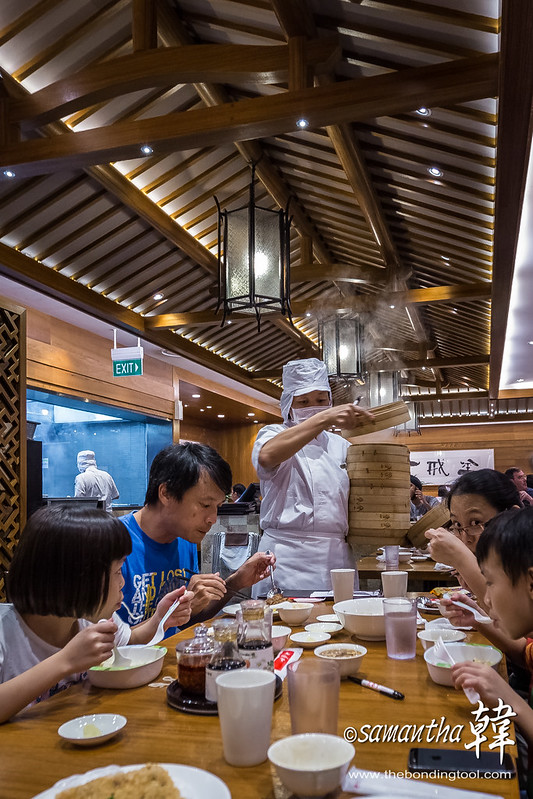 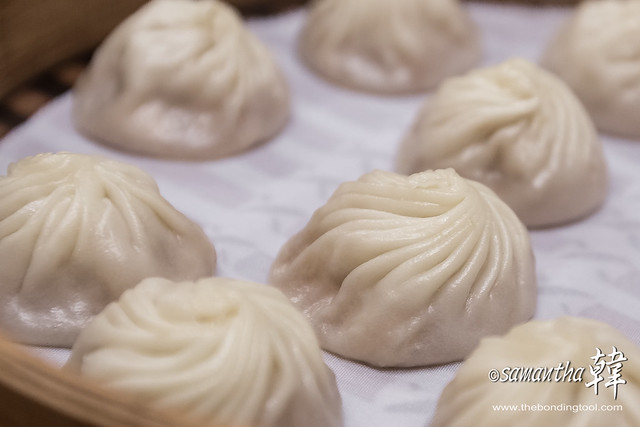 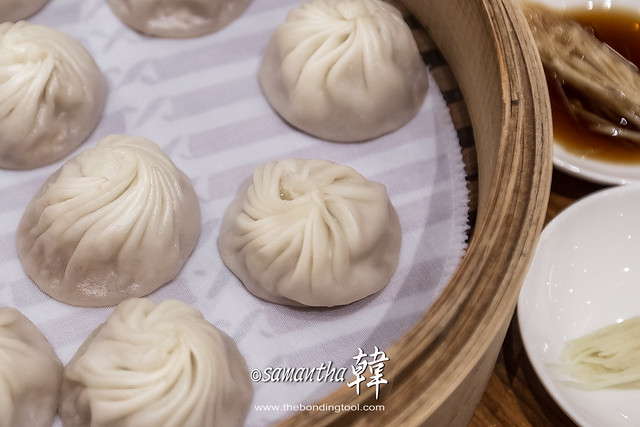 XLB is best eaten whilst hot.
You put the XLB onto a spoon, gently bite off the knotted top and sip on the soup then dip the dumplings into the vinegar and if you like, eat with a few strands of ginger.

I was not hungry that night even though I only had a ham and cheese sandwich earlier (and that was my first bite in 36 hours). I guess I was tired from lack of sleep and my appetite was affected. It would be unfair to review that night’s meal but having said that, food from Din Tai Fung, is generally good. Of all the XLBs I have tasted, the dough skin from Din Tai Fung still is one of the best even though they weren’t exactly melt-in-your-mouth texture as proclaimed. I did not have to ask what my lovely co-diners thought of their food; as evidence, not a single morsel was left behind, well, except for a small helping of Hot & Sour Soup.

Our bill totalled S$105 thereabout (inclusive of Jasmine Tea) which Seow’s wife paid for with her OCBC card so we could have the freebie Hot & Sour soup. We split the cost and she offered us the S$5 voucher but we declined. What a gem!

Operating hours vary for each outlet.

Reservations are available at selected outlets.